How the first biomolecules could have been formed 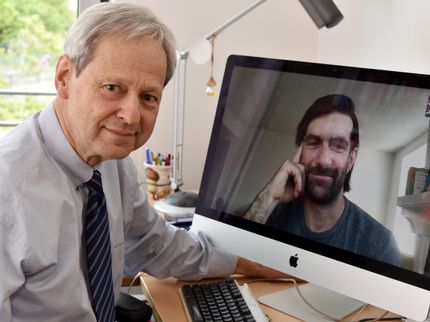 The chemical precursors of present-day biomolecules could have formed not only in the deep sea at hydrothermal vents, but also in warm ponds on the Earth's surface. The chemical reactions that may have occurred in this “primordial soup” have now been reproduced in experiments by an international team led by researchers of Friedrich Schiller University Jena. They even found that one of the nucleobases, which represent the code of our genetic material, could have originated from the surface of our planet.

The Earth is around 4.6 billion years old and was not always a place that was hospitable to life. In the first hundred million years, our planet's atmosphere consisted primarily of nitrogen, carbon dioxide, methane, hydrogen sulphide and hydrogen cyanide, also known as hydrocyanic acid. Free oxygen did not exist. Under these conditions, iron sulphide, which is transformed into iron oxide when exposed to oxygen, is stable. On the surface of iron sulphide, however, biologically important reactions can take place, similar to those that occur in certain iron and sulphur-based enzymes, such as nitrogenases and hydrogenases.

An accidental rediscovery made it possible

“We asked ourselves: what happens when iron sulphide in this primordial atmosphere comes into contact with hydrocyanic acid?” explains Prof. Wolfgang Weigand from the Institute of Inorganic and Analytical Chemistry at the University of Jena. “It was helpful to us that we had accidentally discovered a particularly reactive form of iron sulphide in a successful collaboration with my colleague Prof. Christian Robl. This form had already been discovered twice in history, and on each occasion it was forgotten again: once in 1700 and again in the 1920s. So to speak, the two doctoral students at the time, Robert Bolney and Mario Grosch, discovered it for the third time,” he adds. The two chemists observed in the laboratory that when iron powder is stirred with sulphur in water and slightly heated, after a certain time, iron sulphide is formed as mackinawite in an explosive reaction. This mineral served as a catalyst in the “primordial soup” experiment.

“We added potassium cyanide, phosphoric acid and water to the iron sulphide in a nitrogen atmosphere and heated the mixture to 80 degrees Celsius. The phosphoric acid converts the potassium cyanide into hydrocyanic acid. We then took gas samples from the atmosphere of the respective vessels and analysed them,” explains Weigand. The researchers found substances that may have served as chemical precursors for today's biomolecules.

In the scientific journal ChemSystemsChem, the team confirms, among other things, the discovery of thiols, which occur as lipids in cell membranes, as well as acetaldehyde, which is needed as a precursor for DNA building blocks (called nucleosides). “It was particularly exciting that under these mild conditions we were even able to detect adenine, a nucleobase that is one of the five letters of the genetic code,” Weigand adds with enthusiasm.

By means of isotope labelling, the team was able to prove that the cyanide indeed provided the carbon for the molecules they found. Weigand explains: “In this experiment, the potassium cyanide did not contain the isotope carbon-12, which is the isotope that accounts for 98.9 per cent of carbon naturally occurring in the environment. Instead, it was the heavier – and also stable – isotope carbon-13. It was this isotope that we found in the reaction products. In this way, we were able to prove unequivocally that the carbon atoms in the molecules we found really came from the isotope-labelled potassium cyanide.”

Decades of imagination and patience

Weigand is particularly grateful for the cooperation of the entire international team: “You really need imagination and patience for such work,” he says. “And Robert Bolney and Mario Grosch have proven that. The cooperation with our colleagues at the University of California, Irvine and at LMU Munich was also exemplary.”

The importance of imagination and especially patience in science is exemplified by Wolfgang Weigand himself. Because in 2003, he received the Thuringian Research Prize together with Prof. Günter Kreisel from the University of Jena and Dr Willi Brand from the Max Planck Institute for Biogeochemistry Jena for his paper “A possible prebiotic formation of ammonia from molecular nitrogen on iron sulphide surfaces”.

Now – almost 20 years later – Weigand has also been able to show that the first carbon compounds, from which life later grew, could have formed under these conditions from cyanide on the Earth's surface.