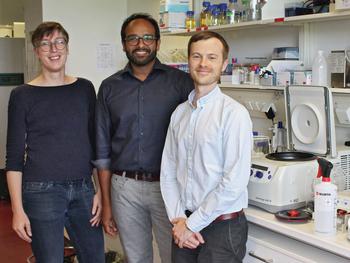 A novel peptide developed at the Universities of Bayreuth and Bristol is eminently suited for the targeted transport of molecules, for example of active substances and dyes, into the cells of mammals. The peptide is characterized by a dual function: It can enter the cell from the outside and interact there with a partner peptide. The partner peptide has to be previously placed inside the cell exactly where the transported molecules are to take effect. The transport system presented in the journal Nature Chemical Biology exemplifies the promising potential of a de novo design of peptides and proteins.

In recent years, biomedicine and pharmacology have developed a large number of active substances that are capable of triggering, enhancing, or inhibiting processes in mammalian cells. However, transporting these substances exactly to where they are required is still a challenge in many cases. The situation is similar when it comes to colour-marking certain structures inside cells for research or diagnostic purposes. It is true that mammalian cells have the ability to incorporate foreign substances through endocytosis. But this by no means guarantees transport to the desired site of action. A new research approach that the Bayreuth biochemist Prof. Dr. Birte Höcker is pursuing with her research group is the rational design of peptides. These should be able to penetrate into the cell interior from the outside and take attached active substances or dye molecules with them. Peptides suitable for this purpose are rather small as they usually consist of less than 30 amino acids.

Until now, however, the problem has been that such peptides – precisely because of their simplicity and small size – do not offer many possible applications. This is because there are only a few areas in the diverse structures of the cell interior where they can dock and deliver the molecules they transport. This disadvantage has been overcome by the peptide developed in Bayreuth and Bristol. It is a basic peptide with a high content of arginine amino acids, and it has two components essential for its functionality. One allows the peptide to enter the cell interior, and the other is able to interact with an acidic partner peptide. This partner peptide is such that it can be placed in very different locations inside the cell using established biochemical methods. Once proteins, larger molecular complexes, or organelles have been labelled with the partner peptide, they can be targeted by the basic peptide that has entered the cell. Like a key in a lock, the basic peptide latches on to the acidic peptide. The targeted placement of the acidic partner peptide is achieved by coupling it with molecules that are in turn introduced into the cell's DNA by transfection.

The Anglo-German research team designed the two previously unknown de novo peptides using methods of computer-assisted protein design. The basis for this work were peptides with a coiled structure, which were described in a structure database. The peptides designed on the computer were then synthesised in the laboratory. Here, biophysical methods and X-ray crystallography were used to identify the real properties and behaviour of the peptides. Experiments with E. coli bacteria and eukaryotic cells revealed that the new peptide system is even suitable for transporting other peptides and proteins.

"Our investigations exemplify how the computational design of peptides and proteins, their subsequent synthesis and characterisation in the laboratory, as well as testing in living cells can intertwine when innovative solutions for biochemical or biomedical questions are being sought," says Prof. Dr. Birte Höcker, head of the Protein Design Group at the University of Bayreuth and corresponding author of the new study. "The new peptide system makes it clear that de novo design is a promising research approach in the search for methods that enable drug or dye molecules to be introduced into mammalian cells in a targeted and gentle manner," adds Dr Guto Rhys, postdoc at the Protein Design research group and one of the three first authors.

More about University of Bristol