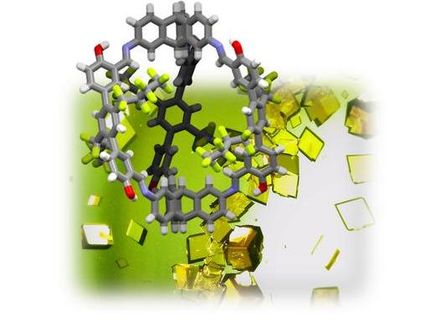 Emissions of greenhouse gases contribute significantly to global warming. Not only carbon dioxide (CO2) but also fluorine-containing gases – including so-called per- or polyfluorinated hydrocarbons, or PFCs – have a significant share in this development. Researchers at the Institute of Organic Chemistry of Heidelberg University led by Prof. Dr Michael Mastalerz recently developed new crystalline materials that can selectively adsorb the molecules of such carbon-fluorine bonds. The Heidelberg researchers hope that these porous crystals may be useful for targeted binding and recovery of PFCs.

Polyfluorinated carbons are organic compounds of various lengths in which the hydrogen atoms of alkanes are partly or fully replaced by fluorine atoms. These atoms are chemically highly stable. They are not ubiquitous in nature and are used mainly for etching processes in the semiconductor industry, in eye surgery, and in medical diagnostics as contrast enhancers for certain ultrasound examinations. “Unlike CO2, which is integrated in natural material cycles, PFCs accumulate in the atmosphere and stay there for several thousands of years before breaking down,” stresses Prof. Mastalerz. Compared to carbon dioxide, PFCs thus have a much greater global warming potential – the impact of one PFC molecule is virtually equal to 5,000 to 10,000 CO2 molecules. According to the researcher, that makes polyfluorinated hydrocarbons a permanent problem that is not only contributing to global warming now but accelerating it as well.

With his research group at the Institute of Organic Chemistry of Heidelberg University, Prof. Mastalerz has developed a new type of crystalline material that can adsorb polyfluorinated hydrocarbons highly selectively, i.e., binding them to its interior surface. The porous crystals are based on shape-persistent organic cage compounds that carry fluorine-containing side chains on the interconnected struts. These side chains react according to the “like attracts like” principle via fluorine-fluorine interactions with the PFC molecules, ensuring they are deposited on the inner surface of the material. In their experiments, the Heidelberg researchers proved that the crystals they developed bind certain fluorine-containing gases such as octafluoropropane or octafluorocyclobutane approximately 1,500 to 4,000 times more strongly than dinitrogen, the main component of air. According to Prof. Mastalerz, these numbers represent extraordinarily high selectivities to bind such PFCs.

Currently Prof. Mastalerz and his team are working on further increasing the selectivity of the crystals and transferring the process to other fluorinated gases, such as those used in medical anaesthesia. “I see enormous potential for development in this area,” emphasises the researcher. He hopes that the adsorbent can be used for recovery of polyfluorinated hydrocarbons at their point of use.