How do killer T cells know where danger is coming from? 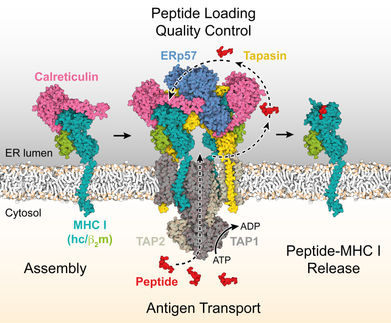 The fully assembled peptide loading complex machinery of antigen processing is formed by the antigen transport complex TAP1/2, the chaperones calreticulin, ERp57, and tapasin, and the heterodimeric MHC I (heavy and light chain in teal and green).

How do killer T cells recognise cells in the body that have been infected by viruses? Matter foreign to the body is presented on the surface of these cells as antigens that act as a kind of road sign. A network of accessory proteins – the chaperones – ensure that this sign retains its stability over time. Researchers at Goethe University have now reached a comprehensive understanding of this essential cellular quality control process. Their account of the structural and mechanistic basis of chaperone networks has just appeared in the science journal Nature Communications. These new findings could be harbingers of progress in areas such as vaccine development.

Organisms are constantly invaded by pathogens such as viruses. Our immune system swings into action to combat these pathogens immediately. The innate non-specific immune response is triggered first, and the adaptive or acquired immune response follows. In this second defence reaction, specialised cytotoxic T lymphocytes known as killer T cells destroy cells in the body that have been infected and thus prevent damage from spreading. Humans possess a repertoire of some 20 million T cell clones with varying specificity to counter the multitude of infectious agents that exist. But how do the killer T cells know where danger is coming from? How do they recognise that something is wrong inside a cell in which viruses are lurking? They can’t just have a quick peek inside.

At this point, antigen processing comes into play. The process can be compared to making a road sign. The molecular barcode is “processed” or assembled in the cell – in the endoplasmic reticulum, to be exact. Special molecules are used in its making, the MHC class I molecules. They are loaded with information about the virus invader in a molecular machine, the peptide loading complex (PLC). This information consists of peptides, fragments of the protein foreign to the body. These fragments also contain epitopes, the molecular segments that elicit a specific immune response. During the loading process, an MHC I-peptide epitope complex thus forms, and this is the road sign that is then transported to the surface of the cell and presented in a readily accessible form to the killer T cells – we could almost say that it is handed to them on a silver platter. The chaperones, special accessory proteins that assist the correct folding of proteins with complex structures in cells, also play a significant role.

The chaperones that support antigen processing are calreticulin, ERp57, and tapasin. But how do they work together? And how important are they for antigen processing? An answer has now been supplied by a study carried out by Goethe University Frankfurt and the University of Oxford and published in Nature Communications. “With this study, we have achieved a breakthrough in our understanding of cellular quality control,” says Professor Robert Tampé, Director of the Institute of Biochemistry at Goethe University Frankfurt. He explains the logic underlying this quality control process as follows: “The MHC I-peptide epitope complex, the road sign, needs to be exceptionally stable, and for quite a long time, because the adaptive immune response does not start instantly. It needs 3 to 5 days to get going.” So, the sign must not collapse after one day; that would be disastrous, as the immune defence cells would then fail to detect cells infected by a virus. This would mean that they would not destroy these cells and the virus would be able to continue its spread unhindered. A similar problem would arise if a cell in the body had mutated into a tumour cell: the threat would remain undetected. It is imperative, therefore, that a quality control system is in place.

As the study shows, the chaperones are central process components: they give the road sign the long-term stability it must have by making a strict selection. By rejecting the short-lived virus fragments in the mass of available material, they ensure that only MHC I molecules loaded with the best and most stable peptide epitopes in complex with MHC I are released from the peptide loading complex. The chaperones have different tasks in this selection process that is so important for the adaptive immune response, Tampé says: “Tapasin acts as a catalyst that accelerates the exchange of suboptimal peptide epitopes for optimal epitopes. Calreticulin and ERp57, in contrast, are deployed universally.” This concerted approach ensures that only stable MHC I complexes with optimal peptide epitopes reach the cell surface and perform their role of guiding the killer T cells to the infected or mutated cell.

In what directions does the study point? “We now better understand which peptides are loaded and how this occurs now. We can also more reliably predict the dominant peptide epitopes, in other words the stable peptide epitopes that will be selected by the chaperone network.” Tampé hopes that the new findings will prove useful for developing future vaccines against virus variants. They could also facilitate progress on future tumour therapies. “Both topics are directly linked. But the applications in tumour therapy are certainly more complex and more for the long term.”

More about University of Oxford