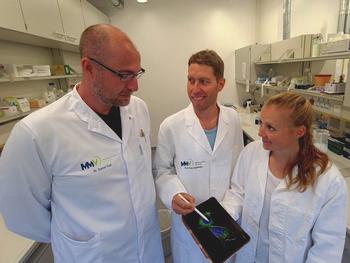 Daniel Todt, Eike Steinmann and Toni Luise Meister (left to right) look at the image of a cell infected with the hepatitis E virus. The capsid protein can be seen in green, the cell nucleus in blue.

Over three million people are infected with the hepatitis E virus every year. So far, no effective treatment is available. An international team has investigated which factors are important for the virus in the course of its replication cycle and how it manages to maintain the infection. The researchers analysed various mutations of the virus and found changes that may allow the virus to trick the immune system. The team from the Department for Molecular and Medical Virology at Ruhr-Universität Bochum led by Dr. Toni Luise Meister, Dr. Daniel Todt and Professor Eike Steinmann reports in the journal PNAS of 15 August 2022.

Advantages and disadvantages of mutations

Antibodies are an important defence mechanism against viral infections in our body. They specifically bind mostly to surface proteins of viruses to render it harmless. But, viruses have developed strategies to evade this neutralisation. During an infection with the hepatitis E virus, random mutations often give rise to virus variants that can coexist within an infected person. The antiviral agent Ribavirin, which many chronically infected patients receive, can even increase the formation of such variants.

The research team took a closer look at eight capsid protein variants from samples of chronically infected patients treated with ribavirin in the laboratory. The team wanted to know: Do the genetic changes bring advantages or disadvantaged for the virus? Do they influence the virus’ ability to replicate or its infectivity?

„While seven of the investigated mutations behaved exactly like the wild type virus, we found differences in one mutant,” reports Toni Luise Meister. This mutation affects the capsid protein, which is essential for packaging the viral particles. “The viruses with this mutation are assembled incorrectly, are probably smaller than the wild type virus, and the capsid protein does not accumulate in the cell,” describes Daniel Todt. These particles are not infectious, but are correctly recognised and bound by antibodies of the immune system. “This could be an advantage for the virus. These defective particles could potentially catch antibodies, so that there are no longer enough to neutralise correctly assembled, infectious virus particles,” speculates Eike Steinmann.