Thriller in the bacterial kingdom

Who would have thought it of bacteria: they are capable of sneaking up on other microorganisms to kill and eat them 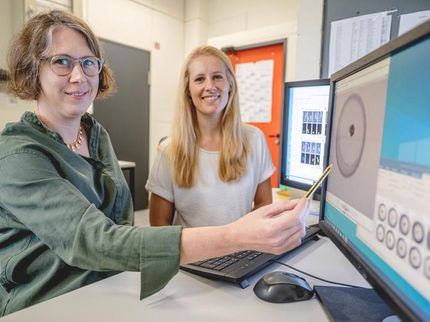 Christine Kaimer (left) and Susanne Thiery have studied how soil bacteria fight each other.

Bacteria have a variety of survival strategies to ensure a sufficient food supply in their densely populated habitats. Certain species of bacteria kill microorganisms of another species, decompose their cells and absorb them as nutrients. The exact mechanism of this process is largely unknown. A research team from the Chair of Microbial Biology headed by Dr. Christine Kaimer has examined these processes in depth. Together with colleagues from the USA, the researchers from Ruhr-Universität Bochum (RUB) present their findings in the journal Cell Reports of 13 September 2022.

Little has been known to date about the relationship between predators and prey in the bacterial kingdom. But researchers suspect that bacterial predators can effect significant changes in the composition of a microbiome and thus shape the ecology of their habitat. To learn more about bacterial predator-prey relationships, Christine Kaimer’s team studied the predatory bacterium Myxococcus xanthus, which is commonly found in soil. Recent work has revealed that M. xanthus kills its prey cell in direct cell-cell contact: the predator approaches a prey cell, stops once contact has been made, and then induces cell death and decomposition within a few minutes. The researchers have analysed the molecular mechanisms of this process in close detail.

“We made specific genetic modifications to M. xanthus and then monitored the interaction of predator and prey cells under the microscope in real time,” explains Christine Kaimer. “As a result, we were able to show that two highly specialised protein secretion systems work together in the killing process. These are protein complexes that presumably transport proteins from the predator cell into the prey cell.” Initially, a so-called Tad-like apparatus induces cell death to prey. A type 3-like system is then needed for decomposing the prey cell so that the nutrients can subsequently be absorbed.

Images with fluorescently labelled proteins showed that the protein secretion systems accumulate in the M. xanthus cell exactly at the contact site between predator and prey. It appears that M. xanthus senses contact with a prey cell and can initiate the killing process with great precision. “We don’t yet understand how exactly the protein secretion systems react to prey contact and which potentially toxic proteins they release,” says Christine Kaimer. “In any case, bacterial predation behaviour is a fascinating field of research, where we still have a lot to learn about how bacteria coexist in their natural environment.”