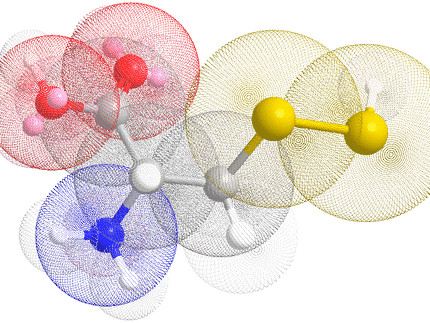 A model of a cystein persulfide molecule

Because of their highly active metabolism, many tumors are susceptible to a special type of cell death, ferroptosis. Nevertheless, cancer cells often manage to escape this fate. Scientists at the German Cancer Research Center have now discovered a new mechanism by which normal as well as cancer cells protect themselves against ferroptosis. Knowledge of these molecular connections could provide new starting points for the treatment of tumors.

A cell dies of ferroptosis when free radicals get out of control and destroy the protective cell membrane in a chain reaction. Healthy cells are occasionally affected when they come under oxidative stress. But cancer cells in particular are susceptible to ferroptosis due to their highly active metabolism - yet many of the malignant cells escape this fate. Researchers worldwide are searching for the factors that make a cell susceptible or resistant to ferroptosis in order to potentially influence this type of cell death therapeutically. Researchers led by Tobias Dick at the German Cancer Research Center have now discovered a new, unexpected mechanism by which cells protect themselves from ferroptosis.

It has only recently become known that human cells can produce so-called persulfides from the sulfur-containing amino acid cysteine. These small molecules are characterized by a group of two sulfur atoms and one hydrogen atom. However, the importance of persulfides inside the cell was mysterious from the beginning and remained unknown.

Uladzimir Barayeu of DKFZ, first author of the current publication, observed that cells boost their production of persulfides as soon as they are stressed by radicals and are at risk of ferroptotic cell death. This was the first indication that cells try to protect themselves with persulfides. The research team showed that persulfides efficiently suppress membrane damage and ferroptosis and also disclosed the mode of action of these molecules: Persulfides proved to be highly efficient radical scavengers. They interrupt the destructive chain reaction that threatens the integrity of the cell membrane.

The action of persulfides is based on an unusual chemical mechanism. When a persulfide encounters a free radical, it takes on its radical character, thus becoming a radical itself. But the new radical behaves in an unusual way. Unlike other radicals, it is extremely inert and incapable of causing damage. It reacts exclusively with itself and produces persulfides again in a subsequent reaction. This means that persulfides hardly consume themselves in the elimination of free radicals. Therefore, even a very low concentration of persulfides can effectively eliminate a much higher concentration of radicals, as the researchers found to their surprise.

The Heidelberg scientists also showed that a cell's ferroptosis sensitivity depends on certain enzymes of sulfur metabolism that generate persulfides. "Our new results could open up completely new starting points for attacking the internal resistance of cancer cells, for example by pharmacological inhibitors of the enzymes responsible for persulfide production," says Tobias Dick, senior author of the current publication.