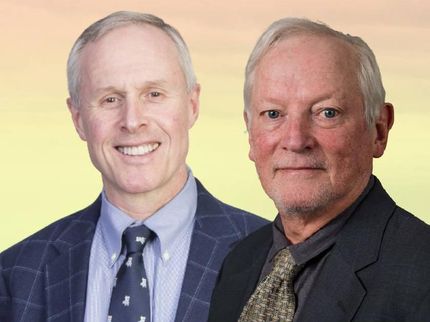 Immunologists Frederick W. Alt (73) of Harvard Medical School and David G. Schatz (64) of Yale School of Medicine are to receive the 2023 Paul Ehrlich and Ludwig Darmstaedter Prize, as the Scientific Council of the Paul Ehrlich Foundation announced. The two researchers are being acknowledged for their discovery of molecules and mechanisms that enable our immune system to perform the astounding feat of recognizing billions of different antigens on first contact.

Both the antibodies produced by B cells and structures on the surface of T cells are able to capture antigens. Collectively, they are referred to as antigen receptors. In the first instance, their tremendous variety is thanks to different gene fragments combining at random to form functional genes. Almost 50 years ago, this principle was first demonstrated for the production of antibodies. However, the finer details of this somatic recombination remained largely in the dark until Alt and Schatz increasingly shed light on the subject. “The picture we have today of the diversification of antigen receptors in the immune system of vertebrates is above all thanks to the two prize winners,” says Professor Thomas Boehm, Chairman of the Scientific Council of the Paul Ehrlich Foundation. “They have raised our knowledge of the development of the immune system to a new level.”

Antigen receptors are proteins consisting of constant and variable parts. In each antibody, for example, two heavy and two light chains are joined together in a Y-shape. Which antigen an antibody can recognize depends on the variable parts in the arms of the Y. In each of our B cells, an antibody with different claws matures during its development in the bone marrow. In total, our body can build approximately ten billion different antibodies, although it has only about 20,000 protein blueprints in the form of genes. It achieves this by means of an extraordinarily daring procedure that makes cutting up and re-assembling the genetic information DNA on certain chromosomes of maturing lymphocytes the norm.

The enzyme complex RAG1/2 discovered by David Schatz and colleagues conducts these cuts at pre-designated sites. For the formation of the variable portions of heavy antibody chains, for example, these sites are located on chromosome 14. There, they flank relatively widely spaced segments in three different regions called V (for variable), D (for diversity), and J (for joining). RAG1/2 conducts cuts at a randomly selected segment from each of these regions for each antibody. Subsequently, DNA repair enzymes assemble a VDJ gene to encode a heavy chain variable region. Frederick Alt discovered the repair enzymes that work together to join the ends of the cut-out segments. In the next step of B cell maturation, the light chains are formed in a similar way, but only a VJ recombination occurs there in this case.

Frederick Alt made further decisive contributions to the understanding of antigen receptor diversity. For example, he succeeded in showing that combinatorial diversity is increased many-fold by the enzymatic insertion of very short random DNA sequences, called N-nucleotides, at the interfaces of the gene segments to be joined. In B cells, antibody diversity is further potentiated by the phenomenon of somatic hypermutation. In this process, the normal rate of mutations affecting only one DNA letter is increased millions of times in the regions of the V segments by an enzyme. Alt, Schatz, and others showed how this enzyme performs its work with pinpoint accuracy. They thus provided a framework for solving the question of how B cells can take advantage of the enormous mutational capacity of AID for antibody maturation without running the risk of suffering tumor-inducing mutations.

Without the recombination-activating enzyme complex RAG1/2, the diversification of antigen receptors is impossible, the maturation of the lymphocytes is disrupted, and a severe immune defect is the consequence. It is all the more remarkable that this molecule apparently originates from a jumping gene – a transposon. These are selfish DNA parasites that crept into our genome at some point and can move from one place to another as jumping genes. Because of their uncontrolled distribution, they can be involved in the development of disease. RAG1/2, however, according to David Schatz's findings, descends from a transposon that all jawed vertebrates, including us humans, tamed for their own purposes very early in evolution. To prevent it from jumping on, they had to fix it in the genome. Schatz has shown which biochemical mechanisms enable this fixation. He was also able, on the basis of structural biological studies in an ancient invertebrate RAG gene to reproduce the act of transposition over several stages. He is thus giving science a fascinating look back at a revolutionary process at the beginning of vertebrate evolution: the development of the adaptive immune system in addition to already existing innate immunity. Building on this view from basic research, translational research will be able to open up new therapeutic perspectives for diseases in which our immune system plays a crucial role.