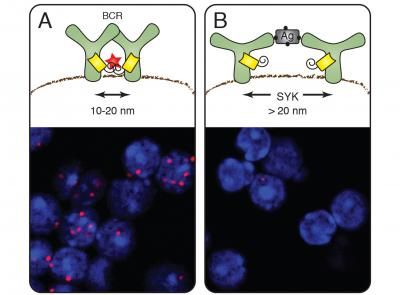 On resting cells (A) the B cell antigen receptors form groups and the nano ruler emits red signals (cell staining below). After activation of the B cells by an antigen the red signal disappears (B). The kinase Syk mediates the opening of the receptor.

After a ten-year effort, Prof. Dr. Michael Reth from the Institute of Biology III of the University of Freiburg and the Max Planck Institute of Immunobiology and Epigenetics has developed a method to investigate the cell surface's organization on a nanometer scale. This allows him to monitor how the antigen receptor, which B cells of the immune system use to recognize foreign substances, changes after activation. This study shows that the receptor components dissociate from each other rather than assemble, as previously assumed. Reorganization of receptors on the cell membrane takes place within a range of 10 to 40 nanometers. Under an optical microscope, however, it is only possible to distinguish objects that lie at least 250 nanometers apart. By using antibody fragments, so-called Fabs, Reth, speaker of the cluster of excellence BIOSS Centre for Biological Signalling Studies at the University of Freiburg, and his team improved the resolution of the previously developed proximity ligation assay (PLA) about 10 times. This technology allows the detection of molecules only when they are located in close proximity to one another. With the help of the more precise Fab-PLA method, the scientists were able for the first time ever to investigate on a ten-nanometer scale how receptors are distributed on the membrane and how they are reorganized. The Fab-PLA method is an important new instrument for the BIOSS Nanoscale Explorer Progamme (BiNEP), one of the research foci at the Cluster of Excellence BIOSS Centre for Biological Signalling Studies of the University of Freiburg.

When applied to the antigen receptors, the Fab-PLA method revealed red fluorescent dots on the cell membrane of inactive B cells: proof that the antigen receptors first appear on the membrane in groups, so-called receptor clusters. As soon as the B cells detected an antigen and were activated, however, the dots disappeared  the receptors had moved away from one another. This finding supports the dissociation model of B cell activation that was proposed by Michael Reth and Jianying Yang in 2010.

The researchers also demonstrated how the dissociation occurs: They deleted in B cells the gene encoding the signaling molecule Syk, a kinase that closely cooperates with the antigen receptor. On B cells without Syk the receptor clusters were still present after they had bound the antigen. Syk is thus the molecular key that opens the receptor cluster and initiates the immune response. In order to elucidate the further details of the activation of B cells, the researchers introduced Syk and the antigen receptor components into fruit fly cells. They modified Syk and determined that the cluster is not broken up until the molecule is bound to the inner part of the antigen receptor.

The researchers published their findings in the new open-access journal eLife. The study also included an investigation of the nanoscale organization of further receptors on B cells, including the CD19 or CD20 molecule. "We discovered that many receptors are organized on the membrane in specific areas at the nanoscale level," explains Kathrin Kläsener, PhD student and primary author of the study. The research was funded in part by an Advanced Grant for nanoscale analysis of protein islands on lymphocytes from the European Research Council (ERC), which Reth received in 2012.