The fundamental constants are still constant 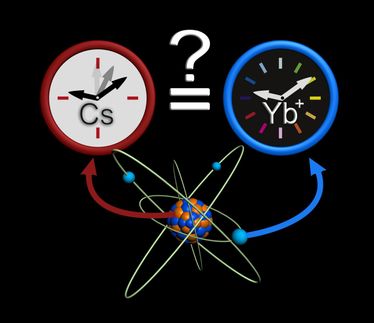 Comparisons between atomic clocks with cesium and ytterbium, respectively, confirm the constancy of the mass ratio of protons to electrons.

Are the fundamental constants really constant? Recent investigations carried out at the Physikalisch-Technische Bundesanstalt (PTB) have shown that one essential fundamental constant - namely the mass ratio of protons to electrons - can have changed only by a maximum of one part in a million over the age of our solar system (i.e. extrapolated over approx. 5 billion years). Previously, scientists deemed the possible changes to be twice as high. To obtain this result, physicists from PTB compared caesium and ytterbium atomic clocks with each other for 7 years. Their results, together with those of a similar experiment carried out at the British metrology institute NPL (National Physical Laboratory), have been published in the current issue of the journal Physical Review Letters.

The Universe is expanding!

After this finding in the 1930s, physicists started to speculate whether in such a dynamic universe, constant quantities could exist at all. Maybe even the so-called "fundamental constants" are subject to temporal changes which could give us key information on the structure and the development of the Universe? Since then, one has sought to find evidence of changes undergone by fundamental constants over cosmologic periods of billions of years by means of astrophysical and geophysical observations. The results allowed somewhat contradictory conclusions. In the past few years, laboratory experiments with atomic clocks have attained such an accuracy that it is already possible to contribute to the answer to this question by studying a period of just a few years. If certain fundamental constants changed, then two atomic clocks which are based on different elements would deviate from each other in a predictable manner over time. This method was used at PTB to check the constancy of an essential physical quantity - the mass ratio of protons to electrons - by comparing an optical clock with a trapped ytterbium ion and caesium atomic clocks.

A proton is approx. 1836 times heavier than an electron and, in addition to being subject to the electromagnetic force, it is also subject to the so-called "strong interaction", which is responsible for the structure and the cohesion of atomic nuclei. Variable fundamental constants would lead to changes in the relative strength of these forces, which, in turn, would have an influence on the masses of the particles involved.

The mass of the electron determines the frequency of the optical atomic clocks; the mass of the protons shows in the frequency of the caesium clock (via the properties of the atomic nucleus). When developing the atomic clocks, the caesium clock has repeatedly been compared with the ytterbium clock at PTB over the past few years - with increasing accuracy. These are currently among the most accurate atomic clocks in the microwave and the optical frequency range, respectively. From these data, it was now possible to conclude that the mass ratio of protons to electrons shows no detectable change up to a relative uncertainty of only a few parts per 10-16 per year. Thus, even when extrapolating across the age of our solar system (i.e. approx. 5 billion years), this means a change in this fundamental constant of less than one part in a million, so that it can still be considered a universal and stable quantity.