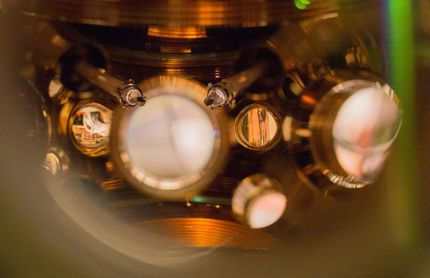 JILA's strontium lattice atomic clock now performs better than ever because scientists literally "take the temperature" of the atoms' environment. Two specialized thermometers, calibrated by NIST researchers and visible in the center of the photo, are inserted into the vacuum chamber containing a cloud of ultracold strontium atoms confined by lasers.

In another advance at the far frontiers of timekeeping by National Institute of Standards and Technology (NIST) researchers, the latest modification of a record-setting strontium atomic clock has achieved precision and stability levels that now mean the clock would neither gain nor lose one second in some 15 billion years - roughly the age of the universe.

As described in Nature Communications, the experimental strontium lattice clock at JILA, a joint institute of NIST and the University of Colorado Boulder, is now more than three times as precise as it was last year, when it set the previous world record. Precision refers to how closely the clock approaches the true resonant frequency at which the strontium atoms oscillate between two electronic energy levels. The clock's stability-- how closely each tick matches every other tick--also has been improved by almost 50 percent, another world record.

The JILA clock is now good enough to measure tiny changes in the passage of time and the force of gravity at slightly different heights. Einstein predicted these effects in his theories of relativity, which mean, among other things, that clocks tick faster at higher elevations. Many scientists have demonstrated this, but with less sensitive techniques.

More about University of Colorado