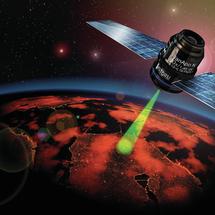 Just like a satellite which provides incredibly sharp images of the earth’s surface: The microscopic dSTORM technology works similarly to this.

In a new Collaborative Research Centre scientists from Würzburg and Jena are examining the function of membrane receptors with the most modern light microscopy. The objective is to gain new findings about how these receptors work and to develop the high-performance light microscopy further.

Membrane receptors are participating as important switching molecules in almost all biological processes. These commonly complex proteins are located in the outer cell boundaries, the cell membranes, just like very sensitive antenna and are waiting for signals in the form of small molecules, so called ligands which can attach themselves specifically and custom-fit to the respective receptors. The receptor then changes its chemical form and therefore its properties and thus gives the starting signal for other signal or material transports in the cell. Membrane receptors are, for example, the docking stations for adrenaline and growth hormones, for nicotine and opiates.

These receptors are the focus of a “ReceptorLight” Collaborative Research Centre, newly set up by the German Research Foundation, where scientists from Jena and Würzburg are participating. Spokesperson is Professor Markus Sauer, physiologist from the Jena University Clinic; representative spokesperson is Professor Markus Sauer, head of the department for Biotechnology and Biophysics at University of Würzburg. The scientists want to continue to decode the switching plans of different membrane receptors in 22 sub-projects and with an entire arsenal of microscopic technologies. Depending on the question, they will also work on the further development of methods and the evaluation of the images gained.

Technology made in Würzburg

One of the methods used, is the one developed by Professor Markus Sauer, the dSTORM technology that allows an extremely precise statement regarding the location and number of molecules through light-induced control of the fluorescence properties of pigments and the stochastic evaluation of many individual molecular images. “In order to display the spatial distribution of more than ten different target molecules in an experiment, we need a multi-level marking, detection and bleaching process that we want to extend to different colouring agents.” This is how the physical chemist from the biocenter of the University of Würzburg describes the program of the project that he is developing together with professor Rainer Heintzmann from the Leibniz Institute of Photonic Technologies and from the Institute of Physical Chemistry in Jena.

Light as a physical tool

Over the last years, new light-microscopic methods have contributed to a better understanding of the way membrane receptors work. “One main advantage of light as a physical tool lies in the comparatively small interruption of biological processes and structures”, emphasizes Professor Klaus Benndorf. “This enabled substantial new findings on the speed of attachment but also on the localisation of the receptors, partly with a spatial resolution in the range of 20 nanometres, i.e. far below the optical resolution limit, Benndorf added.

In a project that is also at home at the two sites of the SFB, the neurologist from Jena, Professor Christian Geis and the biophysicist PD Dr. Sören Doose examine the molecular mechanisms of an encephalitis, where patients form autoantibodies against a glutamate receptor in the cell membrane of neurons. From electrophysiological measurements, two-photon fluorescence microscopy and high-resolution imaging of these receptors, such as dSTORM, the scientists are expecting insights on the basic principles of neurological autoimmune diseases with resolutions that have so far not been achieved in space or time.

And plant cell receptors are also in the focus of scientists: Würzburg plant scientists professor Rainer Hedrich and Professor Dietmar Geiger are researching the switching behaviour of receptors of the dry stress hormone which regulates the stomata, by means of high-resolution fluorescence microscopy and fluorescence resonance energy transfer.

The receptor light study groups in Würzburg and Jena are combining their diverse methodical skills in the area of high-performance light microscopy with insights of physiology and biophysics of very different membrane receptors. In the process, they will not only jointly use highly modern light-microscopic methods but also special algorithms in order to analyse image data and an independent research and image data management which are each established in autonomous sub-projects. “We want to better understand the way membrane receptors work and at the same time we want drive the option of light-microscopic imaging forward - in spatial as well as in temporal resolution, and also in the complexity of the biological systems viewed, says Klaus Benndorf.