Thousands of Droplets for Diagnostics 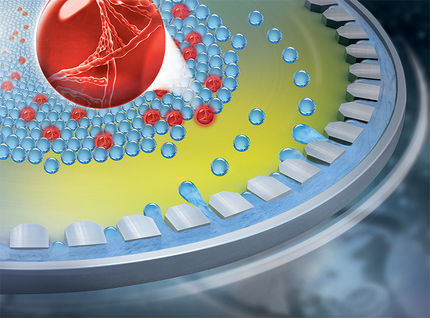 Illustration: 3D illustration of droplet formation on a lab-on-a-chip system: Drops of water tear off from the mouths of the channels as the disk rotates. A layer of oil ensures that the drops do not combine again.

A team of scientists including PhD student Friedrich Schuler from the Laboratory of MEMS Applications at the Department of Microsystems Engineering (IMTEK) of the University of Freiburg has developed a method for dividing a DNA sample into thousands of tiny droplets. What sets it apart from previous methods is above all the fact that it is considerably easier to control and rapidly generates more than 10,000 droplets with a diameter of approximately 120 micrometers each. The entire process takes place on a rotating plastic disk the size of a DVD. The researchers presented the new method in an article in the journal Lab Chip.

Carried by centrifugal force, a watery liquid flows through channels on the rotating disk to a chamber filled with oil. At the mouth of the channel, droplets tear off – similar to a dripping faucet. A bioreaction for the detection of DNA takes place in the droplets: They glow if they contain at least one DNA molecule, enabling the scientists to count the molecules with great precision. This is relevant for numerous clinical applications, such as cancer diagnostics, prenatal diagnostics, diagnosis of blood poisoning, or monitoring of HIV patients.

The researchers use an especially fast detection reaction known as recombinase polymerase amplification for the first time ever in the droplets, reducing the time necessary for the entire procedure from more than two hours to less than 30 minutes. Moreover, the new method enables the entire sample fluid to be distributed among the droplets, without leaving residue in channels or tubes. That saves money and reduces the amount of effort necessary to prepare sample material.

“The disk is easy to use because all of the reactions in it run automatically, and that makes the method attractive for applications,” says Schuler. The disks are inexpensive to manufacture in an injection molding process – a precondition for diagnostic articles, which can only be used once. The researchers hope the method will soon lead to faster and improved procedures in research and hospital laboratories.

The joint research group “Lab-on-a-Chip” of Prof. Dr. Roland Zengerle, head of the LaboratAory of MEMS Applications, and the research association Hahn-Schickard develops and improves analytical and diagnostic processes for fields of application in health, nutrition, demography, and the life sciences. Hahn-Schickard manufactures prototypes and pilot series of such lab-on-a-chip systems at a plant located at the Freiburg Biotech Park.