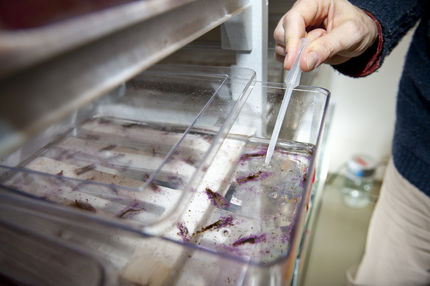 Drugs like antihistamines or beta-blockers in human bodies bind to G-protein coupled receptors. Tiny little molecules that exist on the surface of our cells relay a signal from the outside to the inside of the cell, which finally evokes a reaction within. Humans have several hundred different receptors, many of which are vital for the functioning of their bodies. Dr. Gáspár Jékely, independent research group leader at the Max Planck Institute for Developmental Biology in Tübingen, describes a new strategy to rapidly identify currently unknown receptors in the magazine Cell Report. Thereby his research group also sheds light on the evolutionary history of this widespread family of receptors.

With several hundred G-protein coupled receptors, so-called GPCRs, and many thousand potential ligands to test, it is difficult and time-consuming to find the right receptor-ligand combinations. The study focused on 87 Platynereis GPCRs and 126 different ligands, belonging to a specific class - the neuropeptides. With such large numbers of molecules, there were over 10,000 combinations to test. “We had to come up with a clever strategy to get the work done in about a year rather than five years or more”, says Philipp Bauknecht, the PhD student who carried out the experiments. Much like in speed dating, every receptor should “meet” every neuropeptide in a very short amount of time. This was achieved by testing complex neuropeptide mixtures on each GPCR. A fluorescent protein would then report by emitting green light if there was a “match” between the GPCR and any of the ligands.

The researchers then continued only with the GPCRs that showed evidence of activation and tested combinations of mixtures containing only subsets of the neuropeptides. Combining the results from different mixtures allowed them to find the correct ligands for the GPCRs.

The GPCRs for which ligands had been identified were then used for evolutionary analysis. The researchers found related GPCRs from animals such as mollusks and insects, but also rats, mice and humans. For some of the GPCR families that were identified, this was the first example of what kind of ligand could activate them. The team could show that some of the GPCR-ligand pairs are conserved across mammals, fish, insects and worms. These GPCR-ligand pairs were thus already present in the last common ancestor of ourselves and the ragworm Platynereis, an animal that lived about 550 million years ago.

A particularly interesting finding was the identification of a ligand for the invertebrate thyrotropin-releasing hormone receptor. As its name implies, the ligand for this receptor is the peptide thyrotropin-releasing hormone (TRH). This peptide occurs in vertebrates, where it functions in the control of metabolism. Invertebrates, however, were previously thought to lack this peptide while still having the receptor. Through this study, the research group has identified a ligand for the invertebrate TRH receptor - a short neuropeptide that indeed seems to be related to vertebrate TRH. It was previously not recognized because it is so short and the few amino acids it is made up of changed during evolution. "Without having the receptor-ligand pair, we could not have solved this riddle", says Dr. Gáspár Jékely. The receptor is much longer, and conserved enough to show the relationships between vertebrate and invertebrate versions.

This new collection of GPCR-ligand pairs in the worm Platynereis will help other researchers in the field to identify similar pairs in other animals more easily. Furthermore, the strategy of using complex ligand mixtures is easily transferable to other species. Similar screens performed in other species could broaden our perspective of GPCR evolution even more.