How lipids are flipped 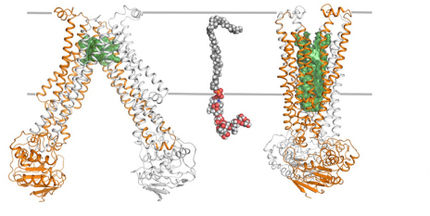 A team of researchers at ETH Zurich and the University of Bern has succeeded in determining the structure of a lipid flippase at high resolution, which has provided insight into how this membrane protein transports lipids by flipping.

Biological membranes have a fundamental role, countless vital processes occur at membranes, including the transport of various substances. The transport of phospholipids and lipid-linked oligosaccharides (LLO) is particularly difficult to achieve due to the bipolar nature of the lipid. This is why flippases are required to transport lipids from one side of the membrane to the other, essentially flipping their orientation. Flippases have important roles in maintaining the asymmetry of cellular membranes, i.e. in the different lipid composition of the outer and inner sides. In mammals, this affects various processes such as blood coagulation, immune recognition and programmed cell death, or apoptosis. Flippases are also essential for transporting lipid-linked oligosaccharides ("LLOs"), which are transferred onto acceptor proteins during N-linked protein glycosylation.

Until now biologists knew neither the high-resolution structures of flippases nor the exact mechanism used to flip LLOs. Three research teams from ETH Zurich and the University of Bern, led by ETH professor Kaspar Locher, have now determined the structure of one such flippase, the PglK protein from the bacterium Campylobacter jejuniThis required the researchers to purify the flippase from bacterial membranes and generate three-dimensional crystals, which were then analysed using X-ray crystallography to determine the positions of all atoms. The scientists determined three distinct structures that corresponded to different states of the flippase during the reaction. Their data allowed the researchers to deduce a molecular mechanism of how PglK flips LLOs.

The researchers show that PglK consists of two identical subunits that move like a pair of scissors when energy (ATP) is consumed. Similar to a credit card reader, the oligosaccharide moiety of the lipid-linked oligosaccharide is then pulled into a hydrophilic channel within the flippase. The hydrophobic, lipidic tail of the LLO molecule remains exposed to the lipidic membrane, causing the LLO to change its orientation so that the sugar part ends up on the outside of the membrane. The flippase itself does not change its orientation during translocation reaction and therefore acts as a catalyst.

The newly-discovered mechanism fundamentally differs from previously known transport processes that catalyze import or export of soluble substrates. "The flipping of lipids in membranes has always fascinated biochemists and cell biologists; the biological solution to this problem thrills us!" says co-author Markus Aebi, Professor of Microbiology at ETH Zurich.

The research groups from ETH Zurich and the University of Bern are the first to have solved the fundamental biological puzzle of how LLOs are flipped. They developed a novel method for studying the reaction in vitro. ETH Professor Aebi insists that only through the cooperation of structural biologists, chemists and microbiologists was it possible to decipher this basic mechanism

Although the present work constitutes basic research, there are diseases associated with mutations in a human flippase, explains Aebi. These diseases are termed 'congenital disorders of glycosylation'. More than 10,000 glycosylation sites in various proteins have been identified in humans.