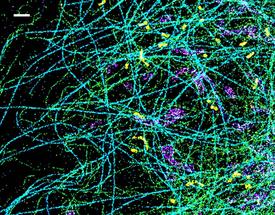 This is a spectrally resolved super-resolution microscopy image of four subcellular targets that were labeled by four far-red dyes at 10 nm spectral separation. Color is used to indicate the measured fluorescence emission position of each single molecule. (Scale bar: 1 µm)

Ke Xu, a faculty scientist in Berkeley Lab's Life Sciences Division, has dubbed his innovation SR-STORM, or spectrally resolved stochastic optical reconstruction microscopy. Because SR-STORM gives full spectral and spatial information for each molecule, the technology opens the door to high-resolution imaging of multiple components and local chemical environments, such as pH variations, inside a cell.

What's more, SR-STORM is high-throughput, able to deliver spatial and spectral information for millions of single molecules in about five minutes, compared to several minutes for a single frame of image comprising tens of molecules using conventional scanning-based techniques.

Current super-resolution microscopy techniques do not deliver spectral information, which is useful for scientists to understand the behavior of individual molecules, as well as to enable high-quality multicolor imaging of multiple targets.

"So we constructed a dual-objective system but dispersed the single-molecule image collected by one objective lens into spectrum while keeping the other image for single-molecule localization," Xu said. "Now we are simultaneously accumulating the spectrum of the single molecules and also their position, so we solved the conundrum."

Next they dyed the sample with 14 different dyes in a narrow emission window and excited and photoswitched the molecules with one laser. While the spectra of the 14 dyes are heavily overlapping since they're close in emission, they found that the spectra of the individual molecules were surprisingly different and thus readily identifiable. "That's useful because it means we had a way to do multicolor imaging within a very narrow emission window," Xu said.