Middle East: The atmospheric signs of the crises 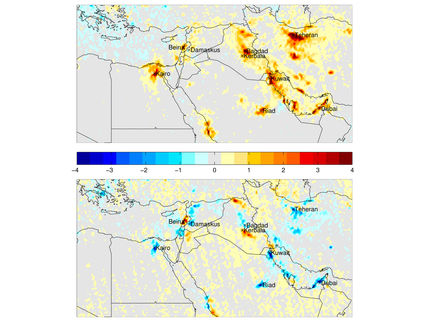 While nitrogen oxide emissions increased in the Middle East from 2005 to 2010 (top map), they dropped in many regions from 2010 to 2015 (bottom map). The colors represent changes in the tropospheric concentration of nitrogen dioxide in 1015 molecules per square centimeter during the period observed.

Political and economic crises as well as international conflicts may have short-term, drastic impacts on society and also on pollutant emissions. That's what researchers at the Max Planck Institute for Chemistry have found in a study of the Middle East. Scientists analyzed nitrogen dioxide pollution in the atmosphere over the last ten years, using satellite measurements. They show that nitrogen oxide emissions declined in regions with armed conflict and upheaval, and also in areas affected by international sanctions. On the other hand, in regions that have adopted many refugees the emissions rose sharply.

In armed conflicts countless people lose their livelihood if not their life, and war also brings the economy to its knees. Millions of people in Syria and Iraq fled their homes. The atmosphere changes as a counterpart to the fate of these people as well as economic crises, seemingly similar to measures that improve air quality. A team led by Jos Lelieveld, Director at the Max Planck Institute for Chemistry, has now provided evidence of such changes in the atmosphere, based on trend measurements of nitrogen dioxide, a chemical that is harmful to human health and the environment. The researchers analyzed data that were measured by NASA's Aura satellite since 2005 over several Mediterranean states and the Middle East and transmitted to earth every day.

The data show that nitrogen dioxide emissions increased considerably in almost all major cities in the Middle East from 2005 to 2010. Between 2010 and 2014, on the other hand, they dropped in many areas of Israel, Syria and Iran, in and around Cairo, Baghdad and Riyadh and also ports in the Persian Gulf, which are main terminals for oil export. In contrast, nitrogen dioxide concentrations rose steeply in Lebanon, parts of Iraq and Jordan during the same period.

The causes for the reduced or increased values can be very different: While stricter environmental laws led to a reduction of nitrogen oxide emissions in Israel and the Gulf states, the decrease in other regions goes hand in hand with political and economic crises, wars and the consequential flows of refugees. "It is tragic that the negative trends we observe in nitrogen oxide emissions accompany humanitarian catastrophes," says Jos Lelieveld.

This is particularly evident in Syria. Since the outbreak of civil war in 2011 the nitrogen dioxide values have dropped by 40 to 50 percent over Damascus and Aleppo. According to information from the United Nations more than 11 million Syrians have fled their homes. Four million have left the country to areas such as neighboring Lebanon where emissions rose by 20 to 30 percent in 2014 alone.

The emission pattern in Iraq is complicated: Since the invasion in 2003 the country has been in turmoil, however, since 2005 power consumption has risen by four to five percent per year, and the gross domestic product even by six to seven percent per year. In parallel, nitrogen oxide emissions continuously increased in the Kurdish north and the south of Iraq from 2005 to 2014. In Kerbala, a city south of Baghdad predominantly inhabited by Shiites, it even rose by about ten percent per year. The picture is very different in and around Baghdad and in the regions in the center of the country occupied by the so-calles Islamic State: There the nitrogen oxide emissions declined since 2010.

Researchers believe that the drastic changes in nitrogen oxide emissions in Iran result from the sanctions that were considerably tightened by the United Nations in 2010. These sanctions caused the previously growing gross domestic product to fall by six percent in 2013 and 2014, and declined nitrogen oxide and sulfur dioxide emissions. It is also found that emissions from Iranian ship traffic, important for the oil exports, dropped drastically. "Analyzing the satellite measurements showed us that economic sanctions have had large effects in Iran since 2010," says Jos Lelieveld. His group will observe how the emissions develop in Iran in future after the UN sanctions are lifted.

The economic crisis in Greece can also be read from changes in nitrogen oxide emissions. Over Athens they dropped by 40 percent since 2008. During the same period, the gross domestic product fell by five percent per year.

It is no surprise that nitrogen oxide emissions are changing with the economic performance of many countries. After all, nitrogen oxides are primarily released by the combustion of coal, oil and gas by industry, power production and traffic. Nitrogen oxides, and nitrogen dioxide in particular, can cause respiratory diseases. Nitrogen oxides also cause the formation of pollutant ozone and particulate matter in the troposphere and contribute to climate change. In some countries, the reduction of nitrogen oxides has been counteracted by other air pollution such as particles from the burning of low quality fuels.

"Nitrogen oxide emission trends are being incorporated into global air quality and climate models," says Jos Lelieveld. Until now, long-term predictions for nitrogen oxide values have often been related to the economic status of a country or its carbon dioxide emissions. For example, an often-used scenario (RCP8.5) of the Intergovernmental Panel on Climate Change (IPCC) assumes that nitrogen oxide emissions in the Middle East increase by two percent per year between 2005 and 2030. The current study by the researchers in Mainz shows that such general projections do not hold, especially when countries are in crisis, and not even when countries pursue the improvement of air quality.