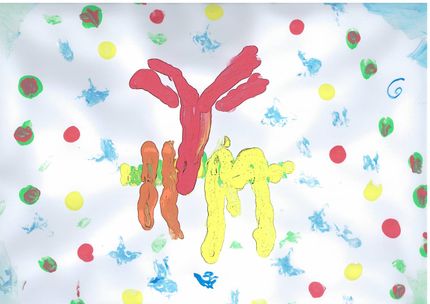 This is artwork painted by the daughter of researcher Susana Minguet. The protein Kidins220 (yellow) interacts with the B cell receptor (red and orange).

Researchers of the University of Freiburg have discovered Kidins220/ARMS in B cells. They also determined that it plays a decisive role in the production of antibodies and the formation of B cells, which are a type of white blood cells. Various teams of researchers had already found that Kidins220/ARMS is present in nerve cells and in T cells of the immune system. However, that it is present in B cells was unknown until now. "We've discovered a new molecular player in the immune system," said the immunobiologist Prof. Dr. Wolfgang Schamel, adding, "This knowledge could help to develop new medications for autoimmune diseases or other illnesses in the future." The postdoc Dr. Gina J. Fiala from Schamel's lab studied Kidins220/ARMS in B cells for her doctoral thesis. Several other members of the cluster of excellence BIOSS Centre for Biological Signalling Studies also collaborated in this study.

B lymphocytes, also known as B cells, are the only cells to produce antibodies, which the immune system needs to fight off foreign intruders like pathogens in order to protect the human body. On their surface, B cells carry B cell receptors. These activate the B cells when an antigen - a substance on the surface of a pathogenic germ - binds to them. The team of scientists from the University of Freiburg has discovered that Kidins220/ARMS interacts with the B cell receptor and affects signalling pathways from the receptor to the interior of the cell. Without Kidins220/ARMS, the receptor's ability to send signals is limited. As a result, the B cells manufacture less antibodies and the immune system is weakened.