Secure data transfer thanks to a single photon 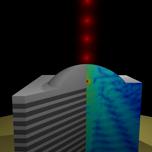 Schematic depiction of the single photon source based on a quantum dot microlens.

Security in data transfer is one of the scientific tasks of the Collaborative Research Center 787 “Semiconductor Nanophotonics”, whose head institution is TU Berlin. Also involved are the mathematicians and MATHEON members Prof. Frank Schmidt, Dr. Sven Burger and Dr. Benjamin Wohlfeil of the Zuse Institute Berlin.

Data are generally transferred as light pulses through optical fibres. Normal transfer takes place as ones and zeroes, where a “1” is represented by a light pulse comprising billions of photons and a “0” is represented by the absence of light. Transfer in this fashion runs the risk of having, say, 10,000 photons siphoned off from the many billions in order to listen in on the information. The normal recipient would never even notice. “As the recipient, you cannot distinguish whether all the information has arrived or if a part of it has been tapped,” explains Prof. Stephan Reitzenstein, member of the special research area and professor at the Institute of Physics at TU Berlin.

The aim in quantum communication is therefore to work with single photons. Put simply, this means that anyone trying to listen in has to pull that one single photon out of the transmission, which in turn means the message no longer arrives at the receiver, and the attempt to eavesdrop is clearly noticed. On top of this, the eavesdropping attempt irreversibly changes the state of the photon so that it cannot be simply reinserted into the data transmission. “Thus they will have disturbed the system in such a way that even copying would be noticed,” Reitzenstein says. Using quantum communication, one could – in theory – make eavesdropping completely impossible.

There are in fact systems that already work on this basis. In the research project, however, they are working and researching on light sources that are not as yet commercially available. Available systems employ normal lasers with an output power of about one milliwatt. This power is then minimised by attenuators so far that, on average, one photon comes out of the system. The problem, however, is that for many pulses, this all-important strong attenuation causes either no photon to be emitted or more than one photon to be emitted per pulse. The possibility of failure of the current systems is thus relatively high, and so these systems are still very slow and relatively unreliable.

In the real world, this means there is still no way commercially to incite individual light sources to reliably emit exactly one single photon at each push of a button. “You can imagine this process as kind of like using a gun, where one photon is shot out at a time. This is exactly where the research project is focused,” Stephan Reitzenstein declares.

According to the physicist’s knowledge, while these processes are being studied worldwide, the great progress made by the Berlin researchers is unique. Also unique is the special lithography method employed in the Berlin approach. They are working with quantum dots on a tiny semiconducting object spanning 10–20 nanometres. If this quantum dot is excited “at the push of a button”, then an electron is stored, with a so-called hole as a counterpart. After a certain time, these two oppositely charged particles recombine and emit a photon. During production, however, such quantum dots form randomly on the surface of the semiconductor material. So, one never knows with certainty where exactly the quantum dot is located in the active layer of the sample. This leads to an arbitrarily poor yield in general. In the special research area, they are therefore developing a model that helps locate the quantum dots, so they can then embed them targetedly into a microlens as a single photon source.

Meanwhile, during the lens production process, all other disturbing quantum dots are removed to ensure only the one, effective quantum dot resides in the lens. This requires an elaborate in-situ lithography method developed over the past three years in Prof. Reitzenstein’s group. The Berlin method thereby offers full control to produce the optimum lens with integrated quantum dot. The quantum dot and lens are made of the same, identical material. So far, this is unique in the world. The yield from this method is namely about 90 percent, unlike usuall methods described worldwide, which achieve typically a yield of only around one percent.

Finally, there is still the problem of the too short range of this quantum data transfer, since this type of communication in principle does not allow signal amplification. Prof. Reitzenstein does not expect this task will be fulfilled within the next four years and thus by the end of the special research area’s term, which is limited to a maximum of twelve years. “This last mentioned problem could be the task of a new Collaboratice Research Center. Yet we are facing major competition in this, above all from China, where sums in the two- to three-digit millions are currently being invested in this research,” the physicist admits.