Usage of plants as bio-factories 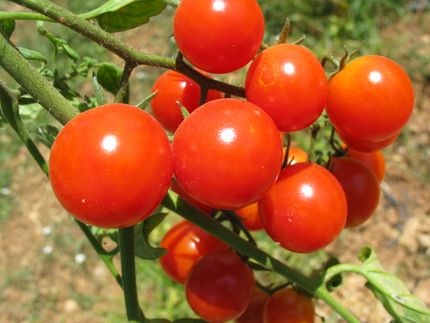 Medically relevant compounds can be enriched in tomatoes to produce industrial quantities of pharmaceuticals at natural basis.

Fruits and vegetables are healthy. This is something every child knows. However, we would need to consume high amounts of many plant products to achieve an efficient dose of helpful natural compounds, because those are often low-concentrated in plants. Scientists of Dr. Alisdair Fernie’s research group at the Max Planck Institute of Molecular Plant Physiology (MPI-MP) and of Prof. Cathie Martin’s group from the John Innes Center, England, described a possibility to use crop plants for large scale production of natural compounds.

Medically relevant substances in plants are so called secondary metabolites, including e.g. pigments and deterrents that enable plants to protect themselves against pests. They are not only useful for the plant itself, but can be helpful for humans as well. The beneficial effects of most medicinal plants are a consequence of them containing these substrates.

Two medical compounds, namely resveratrol and genistein, belong to the phenylpropanoides. Resveratrol is found in grapes naturally and it has been reported to extend the lifespan of different animals. Genistein, a secondary product in soybean, has been suggested to play a role in the prevention of different cancers, particularly breast cancer. However, nobody has the ability to drink 50 bottles of wine or to eat 2.5kg soybeans per day – this would be the necessary amount of consumption to receive the beneficial dose of these natural products. The researchers in Germany and England sought for another way to make these compounds available.

For this purpose, the scientists analyzed a gene which is responsible for the production of the so called AtMYB12 protein. This protein itself can actively regulate the phenylpropanoid production. The researchers used the model plant Arabidopsis thaliana for their experiments, a herb which is growing all over the world. “This protein is working like a switch, which can turn the production of secondary plant substances on or off”, describes Alisdair Fernie, research group leader at the MPI MP in Potsdam.

The integration of valuable compounds into tomatoes has economic advantages. The tomato is a high yielding crop - producing up to 500 tons per hectare in countries delivering the highest yields (FAOSTAT 2013). This qualifies them to work as bio-factories to produce industrial quantities of natural compounds of use. Moreover, they are easy to handle: they can be harvested and juiced and the valuable compounds can be extracted from the juice and directly used as pharmaceuticals in medicine. The authors state, that this technique could also be applied to other compounds. Such production systems are easier and faster in contrast to chemical synthesis or through extraction from traditional plant sources which contain only tiny amounts of respective natural products.