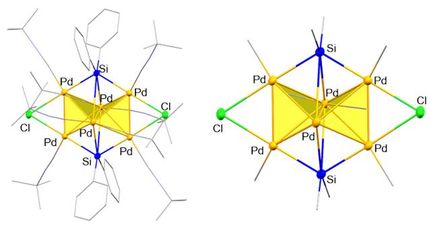 2019 Yusuke Sunada, Institute of Industrial Science, The University of Tokyo

The entire (left) and the core (right) structure of 3-D cluster molecule based on palladium.

Miniaturization is the watchword of progress. Nanoscience - building structures on the scale of a few atoms - has long been at the forefront of chemistry for some time now. Recently, researchers at The University of Tokyo developed the new strategy to construct the subnanosized metal aggregates, building up small metal clusters into grander 3-D architectures. Their creations could have real industrial value.

Nanochemistry offers a range of classic design shapes, such as cubes, rods, wires, and even "nanoflakes," all built from atom clusters. The team at Uni Tokyo's Institute of Industrial Science (IIS) builds nanosheets from the noble metal palladium (Pd). In a new study, they threaded these 2-D building blocks into a distinctive 3-D design.

A smart way to make nanosheets is using templates - organic molecules that act as a framework for the metal atoms. Moving beyond purely organic templates, the IIS team used an organosilicon, a molecule based on three silicon atoms, to construct a bent or "butterfly-shaped" sheet of four Pd atoms. These metals were stabilized by bonding with benzene rings dangling from the silicons.

"Looking at the structure of the Pd4 molecule, we saw the potential to link together multiple sheets of this kind through chemical linkers," says Kento Shimamoto, co-author of the study. "Given the right template, we reasoned, we could expand the dimensionality of our cluster from a 2-D sheet into the third dimension."

Building stable nanoclusters, even in 2-D, is not easy - due to the lack of the appropriate template moleclues that pushes the metal species into close proximity. However, metal centers can be linked stably together, while maintaining a comfortable distance, through the use of bridging atoms like chlorine. The resulting clusters often have unique chemical properties as a result of metal - metal interactions.

The team therefore chose a new organosilicon template with two chlorine atoms replacing part of the organic region. Reacting the palladium source with this new template produced not a 2-D sheet, but a 3-D cluster containing six Pd atoms. The metals apparently formed a pair of Pd4 tetrahedra (sharing two atoms), bridged by chlorine, which forced the Pd atoms close enough to bond with each other.

"3-D subnanoclusters have real potential as catalysts and functional materials," says lead author Yusuke Sunada. "But their function strongly depends on precise control of their shape. Organosilicons are readily available, and offer a platform for designing diverse architectures - linking multiple clusters into larger molecules - in an industrially feasible way.