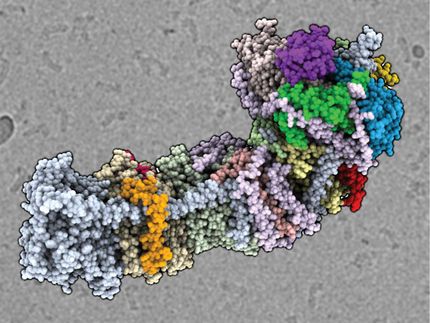 The cryo-EM structure of the NAD(P)H dehydrogenase-like complex (NDH). The atomic coordinate model shown as spheres, colored according to the different subunits, in front of an electron micrograph of frozen NDH particles in the background.

Researchers at the Department of Energy's Lawrence Berkeley National Laboratory (Berkeley Lab) have used one of the most advanced microscopes in the world to reveal the structure of a large protein complex crucial to photosynthesis, the process by which plants convert sunlight into cellular energy.

The finding will allow scientists to explore for the first time how the complex functions and could have implications for the production of a variety of bioproducts, including plastic alternatives and biofuels.

"This work will lead to a better understanding of how photosynthesis occurs, which could allow us to improve the efficiency of photosynthesis in plants and other green organisms - potentially boosting the amount of food, and thus biomass, they produce," said lead researcher Karen Davies, a biophysicist at Berkeley Lab. "This is particularly important if you want to produce renewable bioproducts that are cost-effective alternatives to current petroleum-based products."

Discovered decades ago, the protein complex targeted by the researchers, called NADH dehydrogenase-like complex (NDH), is known to help regulate the phase of photosynthesis where the energy of sunlight is captured and stored in two types of cellular energy molecules, which are later utilized to power the conversion of carbon dioxide into sugar. Past investigations revealed that NDH reshuffles the energized electrons moving among other protein complexes in the chloroplast in a way that ensures the correct ratio of each energy molecule is produced. Furthermore, NDH of cyanobacteria performs several additional roles including increasing the amount of carbon dioxide (CO2) available for sugar production by linking CO2 uptake with electron transfer.

In order for scientists to truly comprehend how NDH executes these important functions, they needed a molecular blueprint indicating the location and connectivity of all the atoms in the complex. This is something that even highly powerful transmission electron microscopy (TEM) technology simply could not provide until very recently.

"Research on this enzyme has been difficult and experimental results confounding for the last 20 years or so because we have lacked complete information about the enzyme's structure," said Davies. "Knowing the structure is important for generating and testing out hypotheses of how the enzyme functions. The resolution we obtained for our structure of NDH has only really been achievable since the commercialization of the direct electron counting camera, developed in collaboration with Berkeley Lab."

Prior to this invention, explained Davies, a staff scientist in Berkeley Lab's Molecular Biophysics and Integrative Bioimaging Division (MBIB), determining the structure of a single molecule could take several years because cryo-TEM imaging relied on film, meaning that each exposure had to be developed and scanned before it could be analyzed. The main limitation, however, was that most images turned out blurry. When you directed a beam of electrons at a molecule, the charged, high-energy particles excited the atoms in the molecule, often making them move at the moment of exposure. This meant that researchers needed to take and process hundreds, if not thousands, of film images in order to get an accurate glimpse of an entire molecule.

The new electron counting camera solves this problem by taking digital movies with an extremely high frame rate, so individual frames can be aligned to eliminate blurring caused by beam-induced particle motion.

In the current study, first author Thomas Laughlin, a UC Berkeley graduate student with a joint appointment at MBIB, isolated NDH complexes from membranes of a photosynthetic cyanobacterium provided by the Junko Yano and Vittal Yachandra Lab in MBIB and imaged them using a state-of-the-art cryo-TEM instrument fitted with the latest direct electron detector. Located on the UC Berkeley campus, the cryo-TEM facility is managed by the Bay Area CryoEM consortium, which is partly funded by Berkeley Lab.

The resulting atom density map was then used to build a model of NDH that shows the arrangement of all the protein subunits of NDH and the most likely position of all the atoms in the complex. By examining this model, Davies' team will be able to formulate and then test hypotheses of how NDH facilitates sugar production by balancing the ratio of the two cellular energy molecules.

"While the structure of NDH alone certainly addresses many questions, I think it has raised several more that we had not even thought to consider before," said Laughlin.