Coming to a monitor near you: A defect-free, molecule-thick film 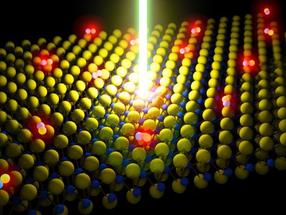 This is a schematic of a laser beam energizing a monolayer semiconductor made up of molybdenum disulfide (MoS2). The red glowing dots are particles excited by the laser.

An emerging class of atomically thin materials known as monolayer semiconductors has generated a great deal of buzz in the world of materials science. Monolayers hold promise in the development of transparent LED displays, ultra-high efficiency solar cells, photo detectors and nanoscale transistors. Their downside? The films are notoriously riddled with defects, killing their performance.

But now a research team, led by engineers at the University of California, Berkeley, and Lawrence Berkeley National Laboratory, has found a simple way to fix these defects through the use of an organic superacid. The chemical treatment led to a dramatic 100-fold increase in the material's photoluminescence quantum yield, a ratio describing the amount of light generated by the material versus the amount of energy put in. The greater the emission of light, the higher the quantum yield and the better the material quality.

The researchers enhanced the quantum yield for molybdenum disulfide, or MoS2, from less than 1 percent up to 100 percent by dipping the material into a superacid called bistriflimide, or TFSI.

Their findings open the door to the practical application of monolayer materials, such as MoS2, in optoelectronic devices and high-performance transistors. MoS2 is a mere seven-tenths of a nanometer thick. For comparison, a strand of human DNA is 2.5 nanometers in diameter.

"Traditionally, the thinner the material, the more sensitive it is to defects," said principal investigator Ali Javey, UC Berkeley professor of electrical engineering and computer sciences and a faculty scientist at Berkeley Lab. "This study presents the first demonstration of an optoelectronically perfect monolayer, which previously had been unheard of in a material this thin."

The researchers looked to superacids because, by definition, they are solutions with a propensity to "give" protons, often in the form of hydrogen atoms, to other substances. This chemical reaction, called protonation, has the effect of filling in for the missing atoms at the site of defects as well as removing unwanted contaminants stuck on the surface, the researchers said.

They noted that scientists have been pursuing monolayer semiconductors because of their low absorption of light and their ability to withstand twists, bends and other extreme forms of mechanical deformation, which can enable their use in transparent or flexible devices.

MoS2, specifically, is characterized by molecular layers held together by van der Waals forces, a type of atomic bonding between each layer that is atomically sharp. An added benefit of having a material that is so thin is that it is highly electrically tunable. For applications such as LED displays, this feature may allow devices to be made where a single pixel could emit a wide range of colors rather than just one by varying the amount of voltage applied.

The lead authors added that the efficiency of an LED is directly related to the photoluminescence quantum yield so, in principle, one could develop high-performance LED displays that are transparent when powered off and flexible using the "perfect" optoelectronic monolayers produced in this study.

This treatment also has revolutionary potential for transistors. As devices in computer chips get smaller and thinner, defects play a bigger role in limiting their performance.

"The defect-free monolayers developed here could solve this problem in addition to allowing for new types of low-energy switches," said Javey.