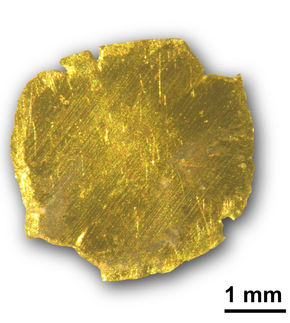 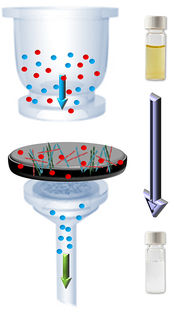 The contaminated water (coloured water in vials) is drawn through the hybrid membrane by negative pressure; the heavy metal ions (red spheres) bind to the protein fibres in the process. The filtered water is of drinking quality.

ETH researchers have developed a new water filtration system that is superior to existing systems in many respects: it is extremely efficient at removing various toxic heavy metal ions and radioactive substances from water and can even be used in gold recovery.

In November, Brazil experienced an unparalleled environmental disaster. When two dams broke at an iron ore mine, a poisonous cocktail of heavy metals was sent pouring into the Rio Doce, reaching the Atlantic some days later. The consequences were devastating for nature and humans alike: countless fish, birds and animals died, and a quarter of a million people were left without drinking water.

This case demonstrates that water pollution is one of today’s most serious global problems. No satisfactory technical solution has been found for the treatment of water contaminated with heavy metals or radioactive substances. Existing methods used to remove water from heavy metals, for example, have several disadvantages: either they are too targeted at a specific element or their filter capacity is too small; additionally, they are often too expensive.

Now, a solution may have been found in a new type of hybrid filter membrane developed in the laboratory of Raffaele Mezzenga, Professor of Food and Soft Materials at ETH Zurich. This technology not only has an extremely simple structure, but also comprises low-cost raw materials, such as whey protein fibres and activated charcoal. Heavy metal ions can be almost completely removed from water in just a single pass through the filter membrane.

“The project is one of the most important things I might have ever done,” says Mezzenga, enthusing about the new development. He and his researcher Sreenath Bolisetty were the only people to work on it, and their publication has just appeared in the journal Nature Nanotechnology.

At the heart of the filtration system is a new type of hybrid membrane made up of activated charcoal and tough, rigid whey protein fibres. The two components are cheap to obtain and simple to produce.

First of all, the whey proteins are denatured, which causes them to stretch, and ultimately come together in the form of amyloid fibrils. Together with activated carbon (which is also contained in medical charcoal tablets), these fibres are applied to a suitable substrate material, such as a cellulose filter paper. The carbon content is 98%, with a mere 2% made up by the protein.

Gold recovery thanks to the filter membrane

This hybrid membrane absorbs various heavy metals in a non-specific manner, including industrially relevant elements, such as lead, mercury, gold and palladium. However, it also absorbs radioactive substances, such as uranium or phosphorus-32, which are relevant in nuclear waste or certain cancer therapies, respectively.

Moreover, the membrane eliminates highly toxic metal cyanides from water. This class of materials includes gold cyanide, which is used commonly in the electronics industry to produce conductor tracks on circuit boards. The membrane provides a simple way of filtering out and recovering the gold, thus the filter system could one day play an important role in gold recycling as well. “The profit generated by the recovered gold is more than 200 times the cost of the hybrid membrane,” says Mezzenga.

The filtration process is extremely simple: contaminated water is drawn through the membrane by vacuum. “A sufficiently strong vacuum could be produced with a simple hand pump,” says Mezzenga, “which would allow the system to be operated without electricity.” Furthermore, the system is almost infinitely scaleable, allowing even large volumes of water to be filtered cost effectively.

As they are drawn through the filter, the toxic substances ‘stick’ primarily to the protein fibres, which have numerous binding sites where individual metal ions can dock. However, the large surface area of the activated charcoal can also absorb large quantities of toxins, which allows delaying the saturation limits of the membranes. In addition, the protein fibres lend mechanical strength to the membrane and at high temperatures allow the trapped ions to be chemically converted into valuable metallic nanoparticles.

Mezzenga is enthusiastic about the hybrid membrane’s filter capacity: in tests with mercury chloride, for example, the mercury concentration present in the filtrate fell by more than 99.5%. The efficiency was even higher with a toxic potassium gold cyanide compound, where 99.98% of the compound was bound to the membrane, or with lead salts, where the efficiency was larger than 99.97%. And with radioactive uranium, 99.4% of the original concentration was bound during filtration. “We achieved these high values in just a single pass,” emphasises Bolisetty, co-author of the invention.

Even over multiple passes, the hybrid membrane filters out toxic substances with a high degree of reliability. Although the mercury concentration in the filtrate increased by a factor of 10 from 0.4 ppm (parts per millions) to 4.2 ppm after 10 passes, the quantity of protein used was extremely low. To filter half a litre of contaminated water, the researchers used a membrane weighing just a 10th of a gram, of which seven percent by weight was made up of protein fibres. “One kilo of whey protein would be enough to purify 90’000 litres of water, more than the amount of water needed in a human life time,” says the ETH professor. This also implies that the efficiency can be further increased to the desirable requirements, by simply increasing the protein content in the membrane, he adds, emphasizing the flexibility of this new approach.

Mezzenga is confident that his technology will find its way onto the market. “There are numerous applications for it, and water is one of the most pressing problems we face today,” he says in light of the torrent of mud experienced in Brazil. The ETH professor has patented his technology and was nominated in March this year for ETH Zurich’s Spark Award. However, because the scientific publication had to undergo a nine-month review process, only now can Bolisetty and Mezzenga make public their discovery.