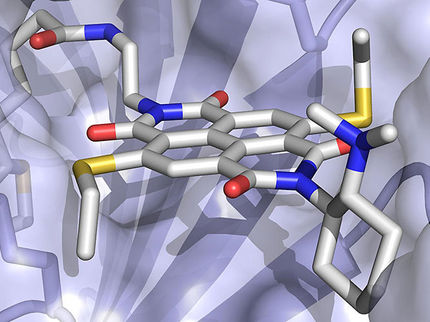 The anion-π enzyme consists of an electron-poor arene cofactor (grey stick representation) embedded within a protein (displayed as surface).

Chemistry has provided many key tools and techniques to the biological community in the last twenty years. We can now make proteins that Mother Nature never thought of, image unique parts of live cells and even see cells in live animals. This week in ACS Central Science, two research groups from the University of Geneva and the University of Basel, both members of the NCCR Molecular Systems Engineering, show how to design an unnatural protein with new-to-nature capabilities.

Proteins are the workhorses of every cell. They are made up of building blocks called amino acids that are linked up and fold together into functional machines to power every major cellular process. To do these tasks, nature relies on twenty of these blocks together with a few special “co-factors”, often vitamins. However, chemists have discovered clever ways of expanding a protein’s repertoire, engineering in different amino acids or co-factors than you would find in natural biology.

Stefan Matile, Thomas Ward and coworkers designed a new co-factor that reverses a classic protein interaction called the cation-π, meaning the stabilization of a positive charge on an electron-rich molecular plane. Nature uses these cation-π interactions to prepare molecules as important as steroids, hormones, vitamins, visual pigments or fragrances, to transduce signals in the brain, to recognize antigens, and so on.

Using their new co-factor, and resulting artificial protein, Matile and Ward’s groups collaborated to create the first “anion-π” enzyme, where that electron-rich molecular plane is replaced by an electron-poor plane to stabilize a negative- rather than a positive charge during a molecular transformation. In a test tube, proteins with this new-to-nature functionality were able to outperform traditional organic catalysts in an important but disfavored addition reaction with high specificity and selectivity. They believe their approach can be moved to work in cells and can help make other currently impossible chemical transformations a reality.