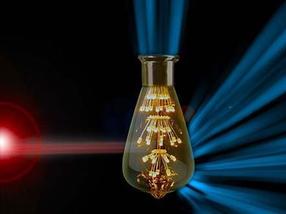 Columbia University scientists, in collaboration with researchers from Harvard, have succeeded in developing a chemical process to convert visible light into infrared energy, allowing innocuous radiation to penetrate living tissue and other materials without the damage caused by high-intensity light exposure.

"The findings are exciting because we were able to perform a series of complex chemical transformations that usually require high-energy, visible light using a noninvasive, infrared light source," said Tomislav Rovis, professor of chemistry at Columbia and co-author of the study. "One can imagine many potential applications where barriers are in the way to controlling matter. For example, the research holds promise for enhancing the reach and effectiveness of photodynamic therapy, whose full potential for managing cancer has yet to be realized."

The team, which includes Luis M. Campos, associate professor of chemistry at Columbia, and Daniel M. Congreve of the Rowland Institute at Harvard, carried out a series of experiments using small quantities of a novel compound that, when stimulated by light, can mediate the transfer of electrons between molecules that otherwise would react more slowly or not at all.

Their approach, known as triplet fusion upconversion, involves a chain of processes that essentially fuses two infrared photons into a single visible light photon. Most technologies only capture visible light, meaning the rest of the solar spectrum goes to waste. Triplet fusion upconversion can harvest low-energy infrared light and convert it to light that is then absorbed by the solar panels. Visible light is also easily reflected by many surfaces, whereas infrared light has longer wavelengths that can penetrate dense materials.

"With this technology, we were able to fine-tune infrared light to the necessary, longer wavelengths that allowed us to noninvasively pass through a wide range of barriers, such as paper, plastic molds, blood and tissue," Campos said. The researchers even pulsed light through two strips of bacon wrapped around a flask

Scientists have long tried to solve the problem of how to get visible light to penetrate skin and blood without damaging internal organs or healthy tissue. Photodynamic therapy (PDT), used to treat some cancers, employs a special drug, called a photosensitizer, that is triggered by light to produce a highly reactive form of oxygen that is able to kill or inhibit the growth of cancer cells.

Current photodynamic therapy is limited to the treatment of localized or surface cancers. "This new technology could bring PDT into areas of the body that were previously inaccessible," Rovis said.

"Rather than poisoning the entire body with a drug that causes the death of malignant cells and healthy cells, a nontoxic drug combined with infrared light could selectively target the tumor site and irradiate cancer cells."

The technology could have far-reaching impact. Infrared light therapy may be instrumental in treating a number of diseases and conditions, including traumatic brain injury, damaged nerves and spinal cords, hearing loss, as well as cancer.

The researchers are currently testing photon-upconversion technologies in additional biological systems. "This opens up unprecedented opportunities to change the way light interacts with living organisms," Campos said. "In fact, right now we are employing upconversion techniques for tissue engineering and drug delivery."