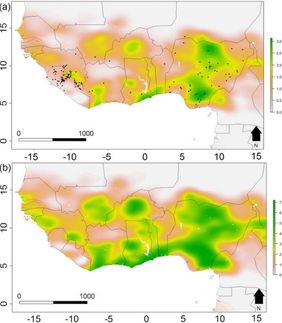 Spatial distribution of simulated LAS spill-over events across its endemic region in western Africa for (a) present day, and (b) projected for 2070 under a medium climate and full land cover change scenario. Values represent the expected number of spill-over events per grid cell per year, and are represented on a linear color scale where green is all simulations and grey zero. Axis labels indicate degrees, in a World Geodetic System 84 projection. Filled black circles represent locations of historic LAS outbreaks.

A model that predicts outbreaks of zoonotic diseases -- those originating in livestock or wildlife such as Ebola and Zika -- based on changes in climate, population growth and land use has been developed by a UCL-led team of researchers.

"This model is a major improvement in our understanding of the spread of diseases from animals to people. We hope it can be used to help communities prepare and respond to disease outbreaks, as well as to make decisions about environmental change factors that may be within their control," said lead author Professor Kate Jones, UCL Genetics, Evolution & Environment and ZSL.

More than 60% of emerging infectious diseases are zoonotic and although Ebola and Zika are well-known, there are many other diseases including Rift Valley fever and Lassa fever which affect thousands already and are predicted to spread with changing environmental factors.

"Our model can help decision-makers assess the likely impact of any interventions or change in national or international government policies, such as the conversion of grasslands to agricultural lands, on zoonotic transmission. Importantly, the model also has the potential to look at the impact of global change on many diseases at once, to understand any trade-offs that decision-makers may have to be make," Professor Jones added.

The study published today in Methods in Ecology and Evolution tested the new model with Lassa fever. It was carried out by partners in the Dynamic Drivers of Disease in Africa Consortium, which was funded under the Ecosystem Services for Poverty Alleviation programme.

Lassa fever is endemic across West Africa and is caused by Lassa virus passing to people from rats. The model predicts the number of people with the disease will double from 195,125 to 406,725 by 2070 due to climate change and a growing human population.

Like Ebola virus, Lassa virus causes haemorrhagic fever and can be fatal. How many people are affected by Lassa fever each year is unclear as many don't have severe symptoms and those that do are often misdiagnosed with malaria; current estimates range from 100,000 to one million.

"Our new approach successfully predicts outbreaks of individual diseases by pairing the changes in the host's distribution as the environment changes with the mechanics of how that disease spreads from animals to people, which hasn't been done before. It allows us to calculate how often people are likely to come into contact with disease-carrying animals and their risk of the virus spilling over. Alongside population increases, the expected future changes to climatic patterns will drive an expansion of the areas of West Africa considered high risk, especially the western most regions around Senegal and Guinea, the coastline of Cote d'ivoire and Ghana, and in Central Nigeria," added first author, Dr David Redding, UCL Genetics, Evolution & Environment.

The team used the locations of 408 known Lassa fever outbreaks in West Africa between 1967-2012 and the changes in land use and crop yields, temperature and rainfall, behaviour and access to healthcare. They also identified the sub-species of the multimammate rat (Mastomys natalensis) which transmits Lassa virus to humans to map its location against ecological factors.

The model was then developed using this information along with forecasts of climate change, future population density and land-use change.

The approach has already proved successful by predicting the current disease patterns of Lassa fever. The researchers say the model could be refined to consider zoonotic disease transmission within human populations by including the impact of travel infrastructure, human-to-human contact rates and poverty -- something that would have been of enormous use in the recent Ebola and Zika outbreaks.