Scientists X-ray the most abundant mineral of Earth 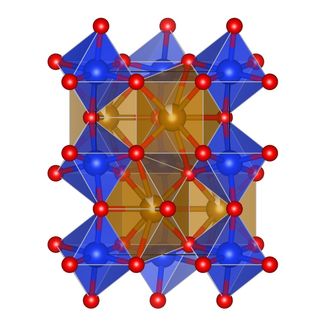 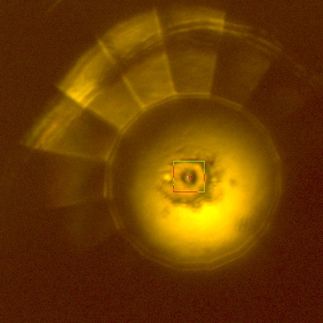 View of the diamond anvil cell's interior: the bridgmanite sample is located in the centre.

Using DESY's bright X-ray light source PETRA III, a team of scientists has discovered unexpected facts about the most abundant mineral on Earth. The mineral bridgmanite makes up roughly one third of Earth’s entire volume and is the major component of Earth’s lower mantle. Thus, its physical properties are one of the deciding factors for understanding the dynamics of our planet, with a direct impact on life on Earth’s surface, ranging from deep-focus earthquakes to geochemical cycles leading to formation of mineral deposits. Bridgmanite is rather hard to study under its ‘normal conditions’ that are very high pressures and temperatures. Therefore many properties were discussed controversially within the scientific community.

The new study revealed that bridgmanite can form an iron-bearing variety which has never been synthesised in laboratories before. This variety can indeed exist throughout the entire mantle and can change the view of the properties of our planet and its behaviour deep underneath the surface, as the team led by Leonid Dubrovinsky from the University of Bayreuth reports in the journal Science Advances. Additionally, the scientists discovered that defects within bridgmanite's crystal lattice continue to have a significant effect on the material’s properties even under high pressure, which was unexpected.

“Our Earth is a dynamic planet and we can feel that every day, for example during earthquakes,” explains Hanns-Peter Liermann, head of the Extreme Conditions Beamline P02.2 at PETRA III, where the experiments took place. “Earthquakes can originate from different points within our planet, and in order to understand how they are generated and propagate, we need to understand the dynamics of our planet that are closely related to the minerals present in the interior.” The lower mantle takes up more than half of Earth’s interior, and up to 80 per cent of the lower mantle consist of bridgmanite.

Bridgmanite is a so-called silicate-perovskite, a crystalline structure that is built out of a number of different chemical elements. It mostly consists of the elements magnesium, iron, silicon, aluminium and oxygen which are specifically arranged on an atomic level to form the crystal structure of bridgmanite. “In our high pressure chamber we simulate the conditions within Earth's lower mantle and observe their influence on the materials. In Earth’s lower mantle very high pressure and temperatures are ‘typical conditions’ for bridgmanite,” explains Dubrovinsky, head of the geo- and material-scientists group of the University of Bayreuth. “Together with colleagues from different synchrotron facilities we’ve developed a unique technique to investigate the crystal structures under these extreme conditions. The crystal structure of bridgmanite is the key to unravel its properties and effects on the dynamics of our planet.”

At extreme pressures of 45 Gigapascals and above, which is 444 115 times the atmospheric pressure and corresponds to a depth of roughly 1350 kilometres below the Earth's surface, the scientists studied the stability of iron- and aluminum-bearing bridgmanite and found that oxidised iron stabilizes iron-rich bridgmanite. For the first time, they could synthesise bridgmanite with pure iron composition in a lab. This iron bridgmanite has a dramatically low compressibility compared to other bridgmanites, which is a fundamental observation. “This effect could play a major role in explaining lateral seismic heterogeneities in Earth’s lower mantle,” explains Leyla Ismailova, first author of the study from the University of Bayreuth. “Lateral seismic heterogeneities describe the effect that seismic waves do not propagate evenly within the Earth’s lower mantle. The sound velocity of this pure iron bridgmanite is roughly two per cent smaller than in normal bridgmanite. This is especially significant for the interpretation of seismic tomography data and thus for understanding fundamental problems of Earth's inner structure.”

Additionally the scientists discovered that even the crystal synthesised at high pressures can still have a significant amount of defects. At first this seems counter-intuitive because one would expect that all defects would disappear when the material is compressed. The finding of an opposite defect behaviour emphasises the high flexibility of the bridgmanite structure and composition which is important for geochemistry and geophysics. “Understanding the properties of this mineral will help us to further understand the dynamics of our planet,” says Liermann.