A hydrophobic membrane with nanopores for highly efficient energy storage 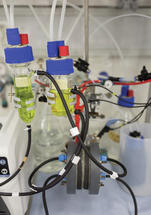 Lab set-up of a redox flow battery with the hydrophobic membrane (grey device at the bottom of the image) and two electrolyte reservoirs (bottles with yellow liquid).

Redox flow batteries are considered a viable next generation technology for highly efficient energy storage. These batteries use electrolytes, chemical components in solution, to store energy. A vanadium redox flow battery, for example, uses vanadium ions dissolved in sulfuric acid. Being separated by a membrane, two energy-storing electrolytes circulate in the system. The storage capacity depends on the amount of electrolytes and can easily be increased or decreased depending on the application. To charge or discharge the battery, the vanadium ions are chemically oxidized or reduced while protons pass the separating membrane.

The membrane plays a central role in this system: On the one hand, it has to separate the electrolytes to prevent energy loss by short-circuiting. On the other hand, protons need to pass the membrane when the battery is charged or discharged. To allow efficient, commercial use of a redox flow batteries, the membrane needs to combine both these functions, which still remains a significant challenge for membrane developers so far.

The current benchmark is a Nafion membrane. This membrane is chemically stable and permeable for protons and is well known for H2 fuel cell applications. However, Nafion and similar polymers swell when exposed to water and loose their barrier function for vanadium ions. Polymer chemists try to prevent vanadium leakage by changing the molecular structure of such membranes.

The researchers from Aachen and Seoul came up with a completely different approach: “We use a hydrophobic membrane instead. This membrane keeps its barrier functions since it does not swell in water,” explains Prof. Dr.-Ing. Matthias Wessling. He is the vice scientific director at the Leibniz Institute for Interactive Materials and heads the chair of Chemical Process Engineering at RWTH Aachen University. “We were pleasantly surprised when we discovered tiny pores and channels in the hydrophobic material and they appear to be filled with water. These water channels allow protons to travel through the membrane with high speed. The vanadium ions, however, are too large to pass the membrane.” The diameter of the channels is less than two nanometers and the barrier function seems to be stable over time: Even after one week or 100 charging and discharging cycles vanadium ions could not pass the membrane. “We reached an energy efficiency of up to 99 percent, depending on the current. This shows that our membrane is a true barrier for the vanadium ions,” says Wessling. At all current densities tested, between 1 and 40 milliampere per square centimeter, the scientists reached 85 percent energy efficiency or more whereas conventional systems do not exceed 76 percent.

These results suggest a new transport model. Instead of swelling, the polymer with intrinsic microporosity, named PIM, condensed significantly. Water molecules that accumulate in the pores, but not in the polymer itself, might be the reason for this phenomenon. The researchers hope to initiate further studies to analyze this effect in detail.

While the phenomenon is puzzling, the scientists from Aachen and Seoul will perform additional application tests: Can they still improve the hydrophobic membrane for an application in a redox flow battery? And is the membrane stable in the long run? If this is the case, the hydrophobic membrane might indeed advance the practical use of redox flow batteries and similar energy storage systems. The researchers are highly motivated by the idea of a stable energy supply when using sustainable energy sources, by making a contribution to power system and frequency stability.