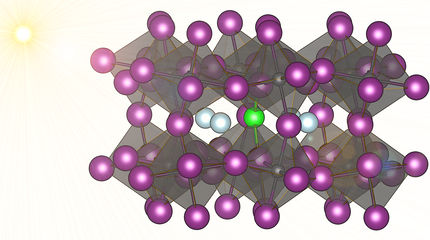 The stability of a very efficient and cheap material for solar cells has now been enhanced by up to two orders of magnitude. The material manipulations that enabled this enhancement were developed in a project supported by the Austrian Science Fund FWF.

Lead-halide perovskites are the darling of solar cell research: the crystalline material is used for cost-effective manufacturing processes and, surpassing the 20% threshold, has already achieved enormous power conversion efficiencies in a comparatively short time. This material still has a fundamental drawback, however, and that is its instability. A recent discovery by an Erwin Schrödinger Fellow of the FWF, in cooperation with Aaron Fafarman and a team of researchers from Drexel University in Philadelphia, US, has now shown that this instability can be considerably reduced through high levels of doping with chloride ions.

David Egger, who is supported by a Schrödinger fellowship and based at the Department of Materials and Interfaces of the Weizmann Institute of Science in Israel, together with his colleagues discovered that certain perovskites can hold high levels of chloride ions (doping) – and that this enhances the stability of the functional material under certain conditions by up to two orders of magnitude. Egger elaborates: “We examined cesium-lead-iodide perovskites. One issue is the stability of the functional phase of this material that interests us for applications: under practically relevant conditions, a phase transition occurs and the excellent photovoltaic properties are lost almost immediately.”

From previous experiments on perovskites including chloride instead of iodide ions one could speculate that doping the material with chloride may enhance its stability. However, achieving this in practice proved to be extremely difficult. Egger and his colleagues chose an interdisciplinary approach to investigate whether chloride doping could have a positive effect on the stability of cesium-based perovskites: “We used atomistic simulations to show that chloride ions are mobile in the perovskite crystal, can easily be incorporated into the host material, and that this would enhance the mechanical stability. Our colleagues designed an experimental approach to introduce chloride into the perovskite material, which they achieved by using a chemical sintering process,”, Egger explains the international cooperation between the Weizmann Institute in Israel and scientists from Drexel University and the University of Pennsylvania in the US.

When analysing the stability of the cesium-lead-iodide-chloride, the team was surprised. As lead-halide perovskites are typically particularly unstable in contact with water, the team monitored material stability of the new compounds at different levels of humidity. At a relative humidity of 54 per cent, the half-life of the functional phase of the new material was six times longer than that of control samples without chloride. At reduced humidity levels of eleven per cent, the half-life became even longer.

Egger: “The enhanced half-life of the functional perovskite phase at a relative humidity of eleven per cent was such that we could no longer detect a phase transition of the chloride-doped perovskite within the maximum possible measurement time of our devices, which was 96 hours. For the undoped perovskite, however, this happened much faster, indicating that chloride doping enhanced the half-life by at least 2 orders of magnitude.” The scientists again combined their results from experiment and theory to show that chloride doping levels beyond two per cent in the newly created material are not possible. The fundamental insight provided by Egger and his colleagues, supported by the Erwin Schrödinger fellowship of the FWF, may now be used in new approaches to exploit the enormous potential of perovskite solar cells in even greater capacity.

More about Weizmann Institute of Science