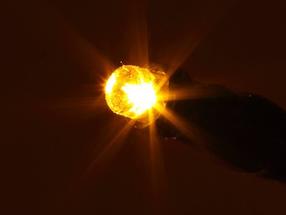 Radicals are usually noted for their high chemical reactivity and often detrimental effects, from human health to the ozone layer. Now radical-based OLEDs could form the basis for next-generation displays and lighting technologies.

The team from the University of Cambridge and Jilin University describe how stabilised radicals form electronic states known as 'doublets', on account of the spin character being either 'up' or 'down.'

Running electricity through these radical-based OLEDs leads to the formation of bright-doublet excited states which emit deep-red light with near-100% efficiency. For traditional compounds (i.e. non-radicals without an unpaired electron), quantum-mechanical-spin considerations dictate that charge injection forms 25% bright-'singlet' and 75% dark-'triplet' states in OLED operation. Radicals pose an elegant solution to this fundamental spin problem which has troubled researchers ever since the development of OLEDs from the 1980s.

Dr Emrys Evans, a lead co-author who works in Professor Sir Richard Friend's group at the Cavendish Laboratory, said "On the face of it, radicals in OLEDs shouldn't really work, which makes our results so surprising. The radicals themselves are unusually emissive, and they operate in the OLEDs with unusual physics."

When isolated in a host matrix and excited with a laser, the radicals, atypically, have close to unity efficiency for light emission. The highly emissive behaviour was translated to highly emissive LEDs, but with another twist: in the devices, the electrical current injects electrons into the unpaired electron energy level of the radical, and pulls electrons out of a lower-lying level, and another portion of the molecule, to form bright-doublet excited states.

In future, efficient blue- and green-light radical-based diodes could appear with further materials innovation. The researchers are working on exploiting radicals beyond lighting applications, and expect radicals to impact other branches of organic electronics research.

Professor Feng Li from Jilin University is a visitor at the Cavendish Laboratory and corresponding author for the work. He said: "The collaboration between the universities and research groups has been instrumental to the success of this work. In future, I hope that we can demonstrate more radical-based solutions for organic electronics."

More about University of Cambridge