Half a needle in a haystack 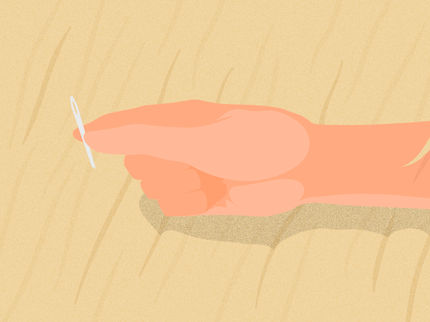 Illustration. Half a needle in a haystack. 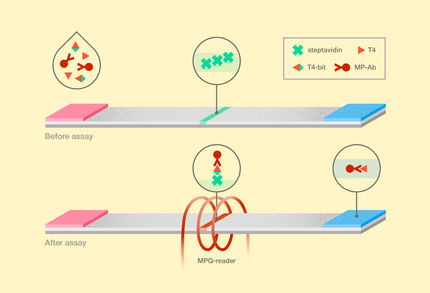 Russian researchers from Prokhorov General Physics Institute of the Russian Academy of Sciences (GPI RAS) and the Moscow Institute of Physics and Technology (MIPT) have developed the world’s first ultrasensitive method for rapid detection of small molecules. This method detects trace amounts of toxins, hormones, vitamins, and other biologically active molecules that are significant for healthcare and food safety monitoring, among other possible applications.

The new lateral-flow assay relies on magnetic labels and takes less than 30 minutes. It is 100 times more sensitive than the enzyme-linked immunosorbent assay, or ELISA, used for conventional lab tests. The authors demonstrated the efficacy of the new approach on a model assay measuring thyroxine in human blood serum. Thyroxine is one of the key hormones produced by thyroid gland and is helpful for monitoring of its function. The assay procedure is affordable and simple enough to be performed at the point of care, right after the blood draw.

The reason it is necessary to detect small molecule compounds with high sensitivity is that they often have a strong effect on the body even in small concentrations. Currently, ELISA is considered to be the gold standard for measuring the concentration of small molecules. However, this method requires adequately equipped labs with highly qualified personnel for its implementation. The sensitivity of thyroid hormone detection might be increased via radioimmunoassays with radioactive labels that have short half-lives despite their significant limitations and being potentially hazardous. Other conventional analyses require long sample preparation and specialized equipment.

The lateral-flow assay (LFA), widely known for its application in pregnancy tests, represents an appealing alternative. Compared with ELISA, it is less elaborate and technically complex. However, in many countries, it has regulatory approval for obtaining threshold results only and just for those cases for which high sensitivity is not essential. It is, therefore, a foremost objective in medical diagnostics to develop a method for small molecule detection that would be rapid, sensitive, and simple.

In the study reported in this story, a joint research team from GPI RAS and MIPT has developed an assay kit that uses a modified LFA with magnetic nanolabels and bifunctional ligands. To test the capacities and limitations of the new system, the authors chose to detect thyroxine, the main thyroid gland hormone, as a model. Additionally, it endowed their research with clinical significance.

The layout of the new magnetic immunoassay differs from the conventional LFA in several respects. A patient’s blood serum, which is tested for free thyroxine, is supplemented simultaneously with magnetic nanoparticle-labeled antibodies and with a bifunctional thyroxine ligand. This bifunctional ligand is a thyroxine covalently bound to biotin via a “bridge” that connects the two molecules but also spaces them apart. The antibodies on magnetic nanoparticles can thus bind both to thyroxine from the blood serum and to the bifunctional ligand. After a certain period of time, enough for the molecules in the solution to bind to each other, the mixture is deposited on a membrane. Particles bound to the bifunctional ligand are trapped on the test line of streptavidin, a protein possessing an extraordinarily high affinity for biotin. To retrieve the assay results, the researchers used original electronic equipment, which employs the ultrasensitive magnetic particle quantification method, or MPQ. It involves nonlinear particle remagnetization by an alternating magnetic field at two frequencies and a subsequent detection of the inductive response at combinatorial frequencies. Together with the accuracy of the MPQ method, the high affinity of the bifunctional ligand toward the test strip ensures an unprecedented sensitivity of the assay reaching a detection limit of about 1 million molecules of the hormone per milliliter (16 femtograms!) with a dynamic range of three orders.

Petr Nikitin, PhD, who led the research team, shared more details about the study: “Our methods for measuring the concentration of small molecule compounds are performed via universal immunochromatographic strips with streptavidin on the detection line. So, they are easy to replicate and scale up. To develop tests for other analytes we would require standard antibodies and special bifunctional ligands, whose synthesis for small molecules is challenging.”

“Fortunately, our toolkit includes original interferometric techniques and equipment that we developed earlier, which enable real-time detection of molecular interaction dynamics,” explained Petr Nikitin, a 1979 MIPT graduate and head of a laboratory at GPI RAS. “We used this equipment to identify the optimal immunoreactants and the thyroxine-biotin bifunctional ligands, which by nature of their spaced-out, ‘bridged’ structure makes both small molecules available for effective interaction with both large molecules — namely, with the detecting antibody and streptavidin. It saved us a lot of time for test development and largely contributed to the success of this research.”

The lead author of the paper, Alexey Orlov, PhD, a researcher at GPI RAS and MIPT’s Nanobiotechnology Lab, added: “We use magnetic particles as nanolabels of immunochemical reactions. A portable device quantitatively detects these particles with record-high precision from the entire volume of the 3D reaction zone on a test strip, rather than from the surface of a membrane, as it happens in the case of optical labels. This is one of the factors ensuring the simplicity of our ultralow-concentration measurements of small molecules in complex media. As a result, virtually anyone is equipped to perform uniquely sensitive assays without elaborate sample preparation.”

“The new assay is a point-of-care testing technique whose characteristics considerably surpass the existing systems for laboratory diagnostics,” said Sergey Znoyko, PhD, the first author of the paper. “In the future, by expanding the range of biological molecules detectable in this way, we would be able to carry out a multiparameter assay of complex media such as blood that would be much cheaper than its current analogues.”

“This approach is simple, affordable, and adaptable for the detection of other small molecules,” said MIPT graduate student Natalia Guteneva, who co-authored the study. “We hope it would be actively used to search for new disease markers, in medical diagnostics, ecological monitoring, food safety control, biosecurity, and elsewhere.”

More about Moscow Institute of Physics and Technology