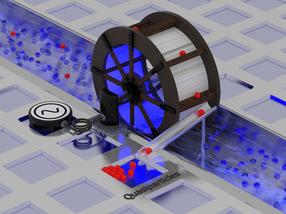 Illustration of the filtering of unwanted quasiparticles (red spheres) from a stream of superconducting electron pairs (blue spheres) using a microwave-driven pump.

An international team of scientists has succeeded in making further improvements to the lifetime of superconducting quantum circuits. An important prerequisite for the realization of high-performance quantum computers is that the stored data should remain intact for as long as possible. The researchers, including Jülich physicist Dr. Gianluigi Catelani, have developed and tested a technique that removes unpaired electrons from the circuits. These are known to shorten the qubit lifetime.

Quantum computers could one day achieve significantly higher computing speeds than conventional digital computers in performing certain types of tasks. Superconducting circuits belong to the most promising candidates for implementing quantum bits, known as qubits, with which quantum computers can store and process information. The high error rates associated with previously available qubits have up to now limited the size and efficiency of quantum computers. Dr. Gianluigi Catelani of the Peter Grünberg Institute (PGI-2) in Jülich, together with his colleagues has now found a way to prolong the time in which the superconducting circuits are able to store a “0” or a “1” without errors. Beside Catelani, the team comprises researchers working in the USA (Massachusetts Institute of Technology, Lincoln Laboratory, and the University of California, Berkeley), Japan (RIKEN), and Sweden (Chalmers University of Technology).

When superconducting materials are cooled below a material-specific critical temperature, electrons come together to form pairs; then current can flow without resistance. However, so far it has not been possible to build superconducting circuits in which all electrons bundle together. Single electrons remain unpaired and are unable to flow without resistance. Due to these so-called quasiparticles, energy is lost and this limits the length of time that the circuits can store data.

Researchers have now developed and tested a technique that can temporarily remove unpaired electrons away from the circuit; with the help of microwave pulses, they are in effect “pumped out”. This results in a three-fold improvement in the lifespan of the qubits.

“The technique can in principle be put to immediate use for all superconducting qubits”, explained Catelani, who, as a theoretical physicist has contributed to the analysis and interpretation of the experimental data. However, he emphasised that the lifespan of qubits is only one of many hurdles in the development of complex quantum computers. Moreover, the new technique means that the quasiparticles are not permanently removed, but flow back again and again. The scientists have another solution ready to solve this problem: the pumping technique can be combined with another method that permanently traps the quasiparticles. Catelani, together with his colleagues from Jülich and Yale, has already analysed and tested such a quasiparticle “trap”. Their results were published in September in the journal Physical Review B.