Fluorescence dyes from the pressure cooker 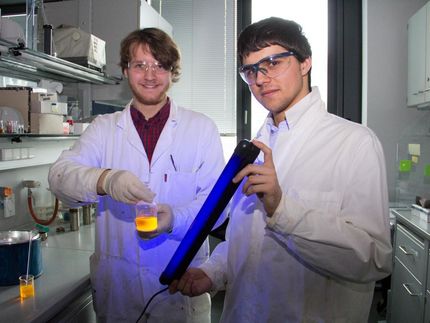 The laboratory of Dr. Miriam M. Unterlass at the Institute of Materials Chemistry at TU Wien has just reported the synthesis of more than 20 different perylene bisimide dyes. This is not impressive per se. The way they prepare these compounds is though: Conventionally, perylene bisimides are generated in highly toxic solvents and employing toxic and expensive catalysts. Moreover, classical reactions towards these dyes require an important excess of the starting compounds. Finally, tedious purification is necessary for obtaining dye products of sufficient purity. All in all, the conventional route is a complex chemical synthesis. "In our approach, we are using the starting compounds in a 1:1 ratio, i.e. without an excess of reactants. The starting compounds are dispersed in water inside a closed reactor. Then the mixture is heated to 200 °C and increased pressure is generated", explains Dr. Unterlass. "In fact, the reactor basically works like a pressure cooker." Such reactions in hot water under pressure are called hydrothermal syntheses. After the reaction has completed, the final perylene bisimide dyes are obtained with high purity, thus removing the necessity for tedious purification. For actual electronic applications, perylene bisimdes are mostly implemented by device engineers and physicists, who often do not have access to chemical laboratories. The novel hydrothermal synthesis bears the potential of enabling an easy access to these materials - an important step towards realistic application.

From big molecules to small molecules

Previously, Miriam Unterlass' team had developed a novel process for high-performance polymers, which equally takes place in hot water. The hydrothermal synthesis of perylene bisimide dyes now shows for the first time that small molecules can also be generated "in the pressure cooker". The order of developments is rather untypical. Normally, novel synthetic pathways are first developed for small molecules - which are often easier to conceive - and later transposed to polymers, i.e. "big molecules". Despite their small size, the hydrothermal synthesis was however very challenging. For perylene bisimides. They are very apolar, which means that they do not like water - at room temperature. By heating the water to increased temperatures, this challenge can however be met. The hydrothermal synthesis of perylene bisimides is highly efficient and environmentally friendly.