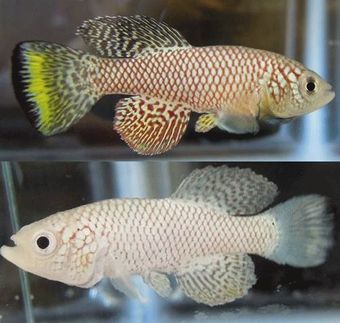 Fish also age: A five-week-old turquoise killifish is resplendent in vivid colours (above). At the age of twelve weeks, however, the colours have already begun to fade (below).

It loses its pigments, its motor skills and mental faculties decline, it gets cancer – the turquoise killifish (Nothobranchius furzeri) struggles with the same signs of old age that affect many other living creatures. Researchers at the Max Planck Institute for Biology of Ageing in Cologne have studied the effect of intestinal microbiota on ageing and lifespan. Their results show that older animals remain active for longer and live longer if they receive the intestinal bacteria of younger members of the species. The results suggest that microorganisms in the gut affect the ageing of an organism.

The turquoise killifish is just a few months old when physical decline sets in. The African fish undergoes all the developmental stages, from hatching to dying, at speed and thus represents the ideal model organism for ageing research. Its short lifespan is comparable to that of the nematode worm C.elegans and the fruit fly Drosophila, which the researchers also studied for signs of ageing. In contrast to both of these, the killifish is a vertebrate and thus more closely related to humans than insects and worms. It means that scientists can obtain information from this fish that would otherwise take years to obtain from other vertebrates.

The turquoise killifish’s gut microbiota is similar in its diversity and composition to that of humans. The microorganisms in the intestines affect the absorption of food, the metabolism and the immune system. As is the case with humans, ageing affects the composition of the microbial community: while many different species of bacteria ensure a healthy gut when young, this diversity not only diminishes in old age but the existing bacteria also contain a larger proportion of pathogens.

As part of their study, scientists working with Dario Riccardo Valenzano at the Max Planck Institute in Cologne treated a number of 9.5-week-old killifish with antibiotics to clear out their intestinal flora. They then exposed these middle-aged animals to the intestinal contents of younger, 6-week-old killifish in an aquarium. When the animals ‘taste’ the particles swimming around them, they also inevitably absorb the gut bacteria in the faecal remains swimming in the water. In this way, the bacteria from the young fish are successfully ‘transplanted’ into the older organism and colonize its gut. The older fish that receive the young intestinal microbiota not only live considerably longer than fish that were exposed only to their own gut microbiota or to those of animals of the same age, these ‘geriatric’ killifish, aged 16 weeks, are also as agile as young fish.

It is still not clear how exactly the microbes affect longevity. “It is possible that an ageing immune system is less effective at protecting the microorganisms in the intestines, with the result that there is a higher prevalence of pathogens in older guts. The gut microbiota in a young organism could help to counter this and therefore support the immune system and prevent inflammation. This could lead to longer life expectancy and better health,” says Valenzano.