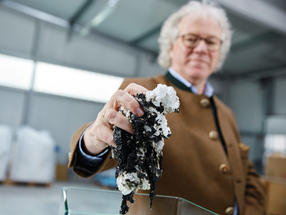 Günter Hufschmid (Germany), nominated for the European Inventor Award 2017 in the category SMEs

Oil spills are among the biggest challenges facing the world today. Millions of litres of oil are spilled into the earth's oceans every year, causing a raft of health problems for nearby communities and wreaking havoc on the environment. Now, thanks to the invention of German chemist Günter Hufschmid and his team at Deurex, there is a powerful new tool to mitigate the damage of oil spills. Developed by accident after a worker at their wax, paint and plastics company left a machine on overnight with the wrong settings, "Pure" is a synthetic wax capable of adsorbing oil and other chemicals faster and better than other materials, making it a potentially game-changing technology.

For this achievement, Günter Hufschmid has been nominated for the European Inventor Award 2017 as one of three finalists in the category "Small and medium-sized enterprises (SMEs)". The winners of the 12th edition of the EPO's annual innovation prize will be announced in Venice on 15 June.

"Hufschmid's ground-breaking innovation has the potential to redefine how oil and chemical spills are dealt with," said EPO President Benoît Battistelli announcing the European Inventor Award 2017 finalists. "The invention stands to benefit the environment and those who depend on it for their livelihoods through its ability to remove toxic substances.."

It is no coincidence that Hufschmid developed his invention the same year as the Deepwater Horizon catastrophe, the world's fourth-largest oil spill in history, and the single largest spill at sea. Back in 2010, as a devastating 774 million litres of crude oil were being released into the Gulf of Mexico, Hufschmid and his team were wondering what to do with the 10 tonnes of fluffy cotton-like wax that had been produced after a worker accidentally left on a wax-making machine overnight with incorrect temperature and pressure settings. Hufschmid hit upon a brilliant idea: Why not see if the mysterious sponge-like substance adsorbs oil? As it turned out, "Pure", as it was called, adsorbed oil better than anything anyone had ever seen.

Pure has significant advantages over existing materials used to clean up oil and chemical spills. It can adsorb about seven times its weight in oil, chemicals or other hydrophobic liquids, compared to the next best binding agent, adsorbing around four times its weight. Its high adsorption ratio means that less of the material - around one-eight as much - is needed to clean up a spill. It also absorbs the contaminants faster. On top of that: Pure doesn't leave behind any residues, chemical or otherwise. The material is also more economical to produce (one gram of raw wax can be transformed into fluffy adsorbent with a surface area of 3 m2), and is recyclable: once it has done its job, it can be wrung out and used again.

Hufschmid's patented invention has already proven effective in both small- and large-scale applications, from car washes to sewage treatment plants. It was also used to assist firefighters in 2013 in southern Germany in retrieving heating oil that had leaked into the basements of dozens of flood victims. Through Deurex's co-operation with an environmental NGO, Pure has also been used to clean up rivers and lakes further afield, for example in Nigeria in the highly polluted Niger Delta. In that area, where some 240 000 barrels of crude oil are spilled every year, researchers have recorded a 24% increase in the prevalence of childhood malnutrition and linked exposure to the oil with increased rates of infertility and cancer. Using Pure to rid areas of oil stands to have a positive impact on many lives.

From the laboratory to the market

Hufschmid and his team at Deurex are pulling out all the stops to make the invention as much a success on the market as it has been in the laboratory. Based in Germany's Saxony-Anhalt region, the company currently employs around 100 people, of whom 20 work on Pure. It has built a new facility capable of producing up to 700 metric tonnes of the substance a year. Further investments with partners are planned in Germany, and in other countries to establish local production.

Deurex has been in talks with companies in the petroleum industry to enable it to gain a foothold there. Total sales in the oil spill management market are expected to reach some EUR 118 billion by 2022, up from EUR 13 billion in 2010.

Pure also holds potential for use in the renewable energy sector: Modern wind mills require a large amount of oil for lubrication, and sometimes that oil can leak out. The use of Deurex's oil-adsorbing wax can help companies save on cleaning costs and reduce the time the turbines are out of action.

"We have a very simple idea," says Günter Hufschmid. "That production facilities for Pure can be set up decentrally in any location - on land or on a ship -and the vision of putting such a production plant on a ship, and distributing Pure across the world's polluted oceans - that would be my goal and my dream."

A chemist and an entrepreneur

Günter Hufschmid studied chemistry at the Technical University of Munich and completed an advanced professional programme in industrial management in Aachen in 1984. After graduating, he began working for the German chemical company BASF as a sales manager for special chemicals.

In 1992, two years after German reunification when the German government was providing subsidies to entrepreneurs in the East in order to kick-start the local economy, Hufschmid left BASF at the age of 33 to found the Deurex Group. The company was built around a novel method for micronising waxes, though once Pure was invented in 2010, they turned their focus to what its staff now like to call their "magic cotton".