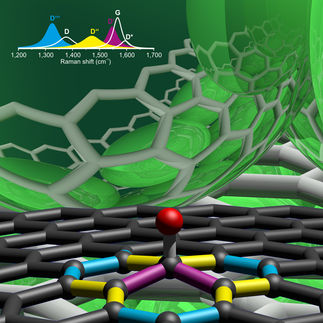 Two-dimensional graphene consists of single layers of carbon atoms and exhibits intriguing properties. The transparent material conducts electricity and heat extremely well. It is at the same time flexible and solid. Additionally, the electrical conductivity can be continuously varied between a metal and a semiconductor by, e.g., inserting chemically bound atoms and molecules into the graphene structure - the so-called functional groups. These unique properties offer a wide range of future applications as e.g. for new developments in optoelectronics or ultrafast components in the semiconductor industry. However, a successful use of graphene in the semiconductor industry can only be achieved if properties such as the conductivity, the size and the defects of the graphene structure induced by the functional groups can already be modulated during the synthesis of graphene.

In an international collaboration scientists led by Andreas Hirsch from the Friedrich-Alexander-Universität Erlangen-Nürnberg in close cooperation with Thomas Pichler from the University of Vienna accomplished a crucial breakthrough: using the latter's newly developed experimental set-up they were able to identify, for the first time, vibrational spectra as the specific fingerprints of step-by-step chemically modified graphene by means of light scattering. This spectral signature, which was also theoretically attested, allows to determine the type and the number of functional groups in a fast and precise way. Among the reactions they examined, was the chemical binding of hydrogen to graphene. This was implemented by a controlled chemical reaction between water and particular compounds in which ions are inserted in graphite, a crystalline form of carbon.

"This method of the in-situ Raman spectroscopy is a highly effective technique which allows controlling the function of graphene in a fast, contact-free and extensive way already during the production of the material," says J. Chacon from Yachay Tech, one of the two lead authors of the study. This enables the production of tailored graphene-based materials with controlled electronic transport properties and their utilisation in semiconductor industry.