Understanding the architecture of our 'second brain' 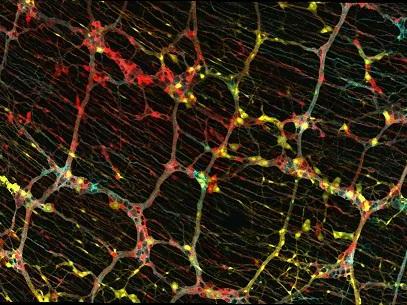 Families of cells (multi-coloured) in a gut wall layer overlap like a Venn diagram. 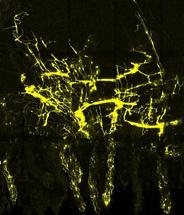 Nerve cells (yellow) from the same parent cell are organized in 3-D columns that extend through the layers of the gut wall.

Scientists have made an important step in understanding the organisation of nerve cells embedded within the gut that control its function -- a discovery that could give insight into the origin of common gastrointestinal diseases, including irritable bowel syndrome and chronic constipation.

The findings reveal how the enteric nervous system -- a chaotic network of half a billion nerve cells and many more supporting cells inside the gut wall -- is formed during mouse development. The research was led by the Francis Crick Institute, in collaboration with the University of Leuven, Stanford University, the Hubrecht Institute and the Quadram Institute Bioscience. The work was funded by the Francis Crick Institute, the Medical Research Council and the UK Biotechnology and Biological Sciences Research Council.

Often known as the 'second brain' for its vast number of neurons and complex connectivity, the enteric nervous system has a crucial role in maintaining a healthy gut. Therefore, understanding how this neural mosaic is organised could help scientists find treatments for common gastrointestinal disorders.

"The gut wall is home to many types of nerve cells which appear to be distributed randomly," says Vassilis Pachnis, Group Leader at the Francis Crick Institute. "But despite this chaos, the neural networks of the gut are responsible for well organised and stereotypic functions such as production of stomach acid, movement of food along the gut, communication with immune cells and bacteria, and relay of information to the brain. We wanted to find out how organised activity emerges from such a chaotic system."

During development, a unique and dynamic population of cells known as progenitor cells divide to produce copies of themselves, which can then generate many other types of cells. Using genetic tools, the team labelled individual progenitor cells of the enteric nervous system with unique colours and followed their descendants -- also marked with the same colour -- through development and into the adult animal. By examining the type of cells produced by single progenitors, they could understand their properties.

They found that some progenitors only produced nerve cells, others only produced nerve-supporting cells called glia, and some produced both. Neurons and glia originating from the same parent stayed close to each other, forming relatively tight groups of cells. Cell groups that descended from different but neighbouring parent cells overlapped like a Venn diagram that could be viewed on the gut surface. Interestingly, this close relationship was maintained by the descendants of single progenitors down through all layers of the gut wall thereby forming overlapping columns of cells.

"We uncovered a set of rules that control the organisation of the 'second brain' not just along a single gut layer but across the 3D space of the gut wall," says Reena Lasrado, first author of the paper and researcher in Vassilis's lab at the Crick.

The team explored whether this intricate structure of the enteric nervous system also contributes to nerve cell activity in the gut.

"Now that we have a better understanding of how the enteric nervous system is built and works, we can start to look at what happens when things go wrong particularly during the critical stages of embryo development or early life. Perhaps mistakes in the blueprint used to build the neural networks of the gut are the basis of common gastrointestinal problems."

More about The Francis Crick Institute