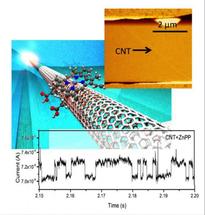 Random telegraph noise from single molecule was adsorbed on SWNT.

Noise is low-frequency random fluctuation that occurs in many systems, including electronics, environments, and organisms. Noise can obscure signals, so it is often removed from electronics and radio transmissions. The origin of noise in nanoscale electronics is currently of much interest, and devices that operate using noise have been proposed. Materials with a high surface-to-volume ratio are attractive for studying the noise produced by nanoscale electronics because they are very sensitive to changes of their surfaces. A representative material of this type is carbon nanotubes, which are rolled sheets of the graphene hexagonal network, which is only one carbon atom thick.

What this means is that the carbon nanotube-based devices were so sensitive that the researchers were able to detect unique signature from single molecules. The ability to characterize single molecules using highly sensitive nanoelectronics is an exciting prospect in the field of sensors, particularly for neuro- and biosensor applications.

"Use of noise signals to identify molecular activity ((interaction) or (active orbital)) is attractive for developing advanced sensing devices," explains corresponding author Megumi Akai-Kasaya. "We demonstrated that noise can be exploited to improve the signal detection ability of a device." The results of this successful demonstration will be published in the near future in a follow-up article.

Signal detection sensitivity may be increased through controllable noise generation. These carbon nanotube-based devices illustrate that it is possible to detect single molecules through their unique noise signatures in the device current signals. Improved knowledge of the molecular-level origin of noise should lead to the development of electronics that use noise to improve their performance rather than degrade it.