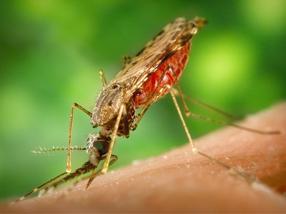 Researchers in a team headed by Professor Thomas Kurz at the Institute of Pharmaceutical and Medicinal Chemistry of Heinrich Heine University Düsseldorf (HHU) have successfully tested an optimised lead compound in animal experiments that acts against plasmodia, i.e. malaria parasites. Lead compounds are molecules which form the starting point for the development of a new drug.

Malaria is a disease caused by blood parasites from the plasmodia family which are transmitted to humans through a bite from the female anopheles mosquito. The malaria parasites pass through several different stages of development, not only inside the human body but also in the mosquito. After the bite, the parasites migrate via the bloodstream into the liver and multiply there without any symptoms initially occurring. In the second stage, the parasites attack red blood cells. This stage is accompanied, amongst others, by severe bouts of fever. In the third stage, sexual forms develop which - following the next meal of blood - can be transmitted to the mosquito again and are responsible for the further spread of the disease.

One of the reasons why the fight against malaria is so complex is because the different development stages are sensitive towards special pharmaceutical substances and the parasites rapidly develop resistance. No effective vaccine so far exists and 25 years have already passed since the introduction of the last important drug, Atovaquone.

The most dangerous type of human pathogenic plasmodium is Plasmodium falciparum whilst, by comparison, only rodents, for example mice, can become infected with Plasmodium berghei.

Together with his assistants Michael Leven und Tanja Knaab and a number of German and international colleagues, Professor Thomas Kurz from HHU’s Institute of Pharmaceutical and Medicinal Chemistry has developed a new class of compound, the hydrazonamides, and successfully demonstrated its effectiveness in animal experiments. The trials were conducted in Basel within the research group led by Dr. Sergio Wittlin using mice infected with Plasmodium berghei.

“The prototype of this new compound class was discovered together with Professor Detlef Geffken at the Institute of Pharmacy in Hamburg in 2007 during my Habilitation,” recalls Professor Kurz. The lead compound from the hydrazonamide class has a similar structure to quinine, the oldest known anti-malarial agent. How the substance works and where exactly in the parasite it acts is still the subject of further research. Professor Kurz brought the new lead compound with him to Düsseldorf and has since been working on its further development in his research group. The long period between its discovery and the successful results of the efficacy test now published shows just how time-consuming modern interdisciplinary research into new drugs is. Further preclinical studies are required before the substance can finally be tested on humans. “One of the next steps would be to use the test substance on mice infected with the human pathogenic parasite Plasmodium falciparum,” says Tanja Knaab. However, for that a special mouse model would be needed which is extremely costly.

The multi-stage process prescribed by law from drug candidate to actual medicinal product intended for human use is always very expensive and complex. A single university institute alone cannot afford it. Development times of over ten years and costs amounting to over a billion euros have to be expected.

However, the development of a new anti-malarial drug is of no great financial interest for pharmaceutical companies because malaria principally occurs in economically weak regions. “Medicines for Malaria Venture” is a non-profit organisation that is conducting important research and development work in the area of anti-malarial drugs. In recent years, this organisation’s work has led to the development of various artemisinin-based combination therapies, amongst others. These therapies currently demonstrate the greatest effect on resistant strains as well.