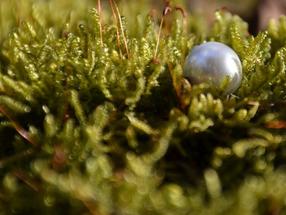 Pearls are among nature's most beautiful creations, and have been treasured for countless centuries. Beneath one's iridescent surface lies a tough and resilient structure made of intricately arranged tiles of calcium carbonate organized by a crew of proteins that guide its formation and repair.

While it is known that pearls are made of calcium carbonate with an organic matrix core, the role of the proteins modulating the organization of these crystals has, until recently, been unclear.

Researchers at New York University College of Dentistry (NYU Dentistry) reported the role of two such proteins, the first two-protein study of its kind, that regulate the processes leading up to the formation of pearl.

A pearl is a byproduct of an oyster's defense mechanism, formed in response to injury to the mantle tissue by an irritant, such as a parasite or grain of sand. Detached cells fall into the inner tissue where they multiply and form an enclosed sac-like structure to seal off the injured remnants. This cavity is then filled with matrix proteins followed by mineral.

The mineral consists of two calcium carbonate components: an inner prismatic layer known as calcite and an outermost layer known as aragonite or the lustrous layer. Both layers are chemically similar to the oyster shell itself.

"In the case of Pinctada fucata, a Japanese pearl oyster that creates precious pearls for the pearl industry, the pearl formation process is mediated by a 12-member protein family known as Pinctada Fucata Mantle Gene, or PFMG. PFMG1 and PFMG2 are part of this PFMG proteome that not only forms the pearl, but also acts as 'maintenance crew' participating in the formation and repair of the shell," explained John S. Evans, DMD, PhD, professor of basic science and craniofacial biology at NYU Dentistry and the study's corresponding author.

Little is known about these proteins except that they are expressed in mantle tissue of the oyster. Using the recombinant versions of PFGM1 and PFMG2, the authors used several characterization techniques to study the behavior of proteins and crystals in various conditions that mimic the ocean water.

"What we found is that PFMG1 and PFMG2 combine to form a hydrogel, and within this hydrogel each protein plays a specific role. PFMG2 determines the size of the hydrogel assemblies and regulates the internal structure of the protein films, whereas PFMG1 enhances the stability of tiny ionic clusters that combine to form calcium carbonate layers of pearl," said Gaurav Jain, PhD, a postdoctoral associate in Dr. Evans's lab and the study's lead author.

"However, once mineral crystals form, PFMG1 and PFMG2 work together and put the finishing touches to the pearl by synergistically modifying the mineral crystal surfaces and creating internal porosities. The interactions between both proteins is enhanced by calcium ions possibly due to interactions between different domains of PFMG1 and PFMG2," said Martin Pendola, PhD, also a postdoctoral associate in Dr. Evans's lab a study co-author.

"Pearl - which is essentially an inside-out version of the mollusk shell - consists of 95 percent calcium carbonate and 5 percent organic matrix. This composition makes pearl approximately 1,000 times tougher than pure calcium carbonate - and one of the most resilient and lightweight materials found in a living organism," said Jain.

This research not only advances the understanding of underlying molecular mechanisms of pearl formation, which could have implications for quality and productivity in the pearl industry, but could also aid in the development of fracture resistant materials. These resilient materials could have a variety of applications, including in the manufacturing of improved dental implants, materials for aerospace applications, or energy transmission.