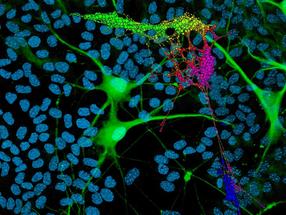 Scientists at Columbia's Zuckerman Institute today received a grant from the Chan Zuckerberg Initiative (CZI) donor advised fund, an advised fund of the Silicon Valley Community Foundation, to construct an atlas of gene activity of all cells in the human spinal cord. Once completed, the atlas would provide a reference map for researchers investigating injuries or diseases of the spinal cord, including amyotrophic lateral sclerosis (ALS) also known Lou Gehrig's disease. This effort, along with the wider CZI Single Cell Atlas project, could prove transformational for science and medicine, laying the groundwork for tailored therapies that target specific malfunctioning cell types, offering hope that spinal-cord disease and injury may one day be more effectively treated, or even cured.

"Despite decades of research, it's difficult to make meaningful progress in the fight against diseases such as ALS -- be it better palliative care or more ambitious strategies that reverse its course -- until we identify the cellular players and their specific roles in disease progression," said Abbas Rizvi, PhD, a postdoctoral research scientist in biochemistry & molecular biophysics at Columbia University Medical Center (CUMC).

"Now, with the support of the Chan Zuckerberg Initiative, we can identify those cellular players, and give scientists and doctors new tools to study any disorder that wreaks havoc on the cells of the spinal cord," said Tom Maniatis, PhD, the senior investigator on this grant. Dr. Maniatis is a principal investigator at Columbia's Mortimer B. Zuckerman Mind Brain Behavior Institute and director of Columbia's Precision Medicine Initiative.

The sheer number and complexity of cells in the spinal cord, and a lack of understanding of their specific roles in neurodegenerative diseases, is a major challenge. However, the advent of single-cell genomics tools that classify cells based on which genes are switched on and which are not -- the cell's so-called genetic identity -- enables scientists to address these fundamentally important questions for the first time.

In parallel to these technical advances, exciting progress has been made in the development of new mathematical tools capable of capturing deep insights into biological mechanisms.

In May of 2017, Drs. Rizvi and Maniatis, in collaboration with Raul Rabadan, PhD, a professor of systems biology and biomedical informatics at CUMC, published the application of a mathematical tool capable of tracing a cell's roadmap to maturity -- from an immature stem cell to a mature motor neuron, the cell type that drives movement and that is a main target of neurodegenerative disease. This approach, called topological data analysis, offers a way to map, in general, how stem cells give rise to all cell types.

"That work was proof of concept of a data-driven method for tracking individual cells over time," said Dr. Rizvi, who is also a member of the Maniatis Lab at Columbia's Zuckerman Institute. "Today's grant will now allow us to extend further development and application of topological and machine-learning algorithms. We will then be poised to achieve a better understanding of the complexity of the spinal cord's billions of cells, in both healthy individuals and those suffering from diseases of the spinal cord."

Specifically, the Columbia team will take a multi-pronged approach to building their atlas. They will employ advanced, single-cell genomics to create a unique identifier -- a genetic ID tag for each cell in the spinal cord. They will then compare these data with the cellular makeup and organization of cells from preserved, human spinal-cord tissue, which will provide the basis of a single-cell atlas.

This grant is part of the Human Cell Atlas project, a larger effort that grew from an enthusiastic scientific community and aims to map the function of all 37 trillion cells in the human body. The results of this project -- including any new tools, technology and software developed along the way -- will be openly accessible and freely available, in order to rapidly advance scientific understanding of human physiology in health and disease.

"The Human Cell Atlas is a worldwide effort to map and characterize every type of cell in the healthy human body -- including cell types, numbers, locations, relationships and molecular components," said Cori Bargmann, PhD, president of Chan Zuckerberg Science. "It's a long-term project to provide a free, open resource for future studies of human health and disease. Like the Human Cell Atlas itself, each project reflects the diverse and collaborative nature of the work. We are excited to begin working with scientists and engineers from eight countries across four continents on these promising projects. This is truly a global collaboration."

"Our goal first and foremost is to provide a sound, scientific understanding of all cells in the human spinal cord," said Dr. Maniatis, who is also the Isidore S. Edelman Professor and chair of biochemistry & molecular biophysics at CUMC. "But we are also excited about sharing new data and technologies with other Atlas teams -- and with the scientific community at large. With the Chan Zuckerberg Initiative's support, we are hoping our efforts will serve a greater purpose, and demonstrate that Columbia's Zuckerman Institute, and the University as a whole, has an important role to play in this critical effort."