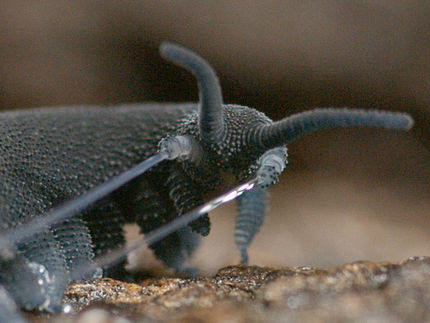 Slimy hunting weapon: Velvet worms, which look like caterpillars with short legs, capture prey with a secretion that forms polymer threads as the prey struggles to free itself.

Soluble polymer fibres: The slime of velvet worms contains nanoglobules made up of lipids and proteins. Shear forces cause the proteins to form fibres covered by a fatty layer. The fibres can dissolve in water again to release the original nanoparticles, from which the polymer can form again.

Nature is an excellent teacher – even for material scientists. Researchers, including scientists at the Max Planck Institute of Colloids and Interfaces, have now observed a remarkable mechanism by which polymer materials are formed. In order to capture prey, velvet worms shoot out a sticky secretion that stiffens into strong threads under the action of force. The extraordinary thing about these threads is that they can be dissolved and then reformed again. The fact that reversible polymer fibres can be drawn from the previously liquid secretion is a very interesting concept for researchers. It is quite possible that one day it will be possible to synthesize novel recyclable materials based on the principle of velvet worms.

Some animals produce amazing materials. Spider silk, for example, is stronger than steel. Mussels secrete byssus threads, which they use to cling tightly to stones under water. The material secreted by velvet worms is no less impressive. These small worm-like animals, which look like a cross between an earthworm and a caterpillar, spray a sticky liquid to ward off enemies or catch prey that is particularly deadly for prey such as woodlice, crickets and spiders: As soon as they try to wriggle out of the slimy threads, their struggles cause the threads to harden, leaving no hope of escape.

“The shear forces generated by the prey’s struggles cause the slime to harden into stiff filaments,” explains Alexander Bär, a doctoral student at the University of Kassel, who is studying under the velvet-worm expert Georg Mayer. In order to investigate the slime of an Australian velvet worm species, the biologist worked closely with researchers from the Max Planck Institute of Colloids and Interfaces in Potsdam. The chemist Stephan Schmidt, for example, now a junior professor at Heinrich Heine University in Düsseldorf, helped to elucidate the nanostructure of the slime. A research group headed by biochemist Matt Harrington in the Biomaterials Department of the Potsdam Institute focused on other questions concerning the chemical composition and molecular processing. The interdisciplinary group of scientists was particularly interested in how the composition and structure of the secretion changes during thread formation.

“We had already known that the slime consists mainly of large protein molecules and fatty acids,” Alexander Bär says. At the Max Planck Institute in Potsdam, the researchers discovered that the proteins and lipids combine to form tiny globules. “Velvet worms produce the protein and fat molecules as well as other components separately”, Bär explains. “Outside the gland cells, the nanoglobules then form independently to create the thread-forming and adhesive properties.” The globules are formed with remarkable precision in that they are uniform in shape and always around 75 nanometres in diameter.

Velvet worms store their liquid weapon until it is needed. They then shoot the slime at their prey or foe through two glands located on either side of their head by means of muscular contractions. “At first the sticky consistency does not change,” Bär says. “However, as soon as the prey begins to struggle, shear forces act on the slime to rupture the nanoglobules.” Vibrational spectroscopy studies in Potsdam showed that proteins and fatty acids separate in the process. “Whereas the proteins form long fibres in the interior of the slime, the lipid and water molecules are displaced to the outside and form a kind of sheath,” Bär explains. The researchers also found that the protein strand inside has a tensile stiffness similar to that of Nylon®. This explains the remarkable performance of the filaments.

Further experiments showed that the polymerized slime threads can be dissolved in water again within a few hours of drying. “The astonishing thing for us was that the proteins and lipids evidently mix again to form the same nanoglobules we had already found in the original slime,” Matt Harrington says. The newly formed protein-lipid globules were even similar in size to those in the natural secretion. “Evidently, a mechanism of self-organization is at work which we do not yet fully understand,” Harrington says.

Another startling discovery was that sticky threads can be drawn again from the recovered slime. And they behaved exactly like freshly secreted velvet-worm secretion under the influence of shear forces: they hardened. “This is a nice example of a fully reversible and indefinitely repeatable regeneration process,” says Matt Harrington. Intriguingly, this is all accomplished with biomolecules and at normal ambient temperatures. Velvet worms could therefore serve as a model for manufacturers of synthetic polymers and could conceivably teach them a lot about the sustainable production of synthetic materials.

Harrington agrees. The biochemist can well imagine that one day we will be able to synthesize macromolecules for industrial applications in a similar manner based on renewable raw materials. In the case of spider silk, it has already been possible to produce analogous proteins industrially and to supply the fibres produced from them to the garment industry.

How are proteins and lipid molecules separated?

A polymer that dissolves in water, like the solidified threads of velvet worms, would probably be impractical. But the principle could generate new inspirations in materials science, Matt Harrington believes. “At the moment, the first step is to understand the mechanisms better,” says the biomaterials specialist, who has now begun a professorship at McGill University in Montreal. For example, the scientists are interested in why mechanical shear forces cause the proteins to separate from the lipid molecules in the first place. They also want to determine the factors that govern the reversible formation of nanoglobules of uniform size. Another unanswered question is how the protein units combine to produce rigid fibres without forming fixed chemical bonds, says Max Planck researcher Harrington.