Clever use of mirrors boosts performance of light-sheet microscope 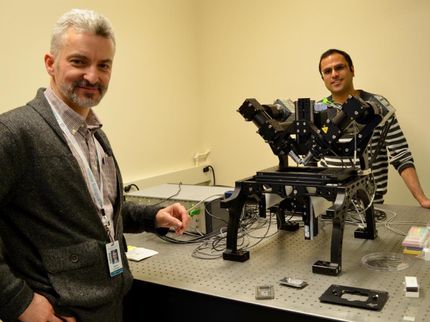 Marine Biological Laboratory (MBL) Fellows Patrick La Riviere of University of Chicago, left, and Hari Shroff of the National Institute of Biomedical Imaging and Bioengineering with the diSPIM system (Dual-view Selective Plane Illumination Microscopy) co-developed by Shroff's laboratory and Applied Scientific Instrumentation. Note the two objectives mounted at right angles above the sample. A light sheet is created from one objective and imaged through the other objective. A stack of images is created by moving the light sheet through the sample. Especially useful for live-cell imaging and developmental biology, the system provides rapid 3-D imaging with low phototoxicity to samples.

Using a simple "mirror trick" and not-so-simple computational analysis, scientists affiliated with the Marine Biological Laboratory (MBL) have considerably improved the speed, efficiency, and resolution of a light-sheet microscope, with broad applications for enhanced imaging of live cells and embryos.

"In one sense, it couldn't be easier," MBL Fellow Hari Shroff of the National Institute of Biomedical Imaging and Bioengineering (NIBIB) says of the team's technique. Instead of growing their biological samples on glass cover slips, they used mirrored cover slips, which are commercially available. They then mounted the samples on a microscope invented in Shroff's lab (the diSPIM), which has two objectives providing perpendicular views of the sample (see photo).

In the typical diSPIM set-up, one objective transmits a thin sheet of light to the sample while a camera behind the second objective collects the image. The objectives then switch roles: One illuminates a thin section of the sample in the perpendicular direction while the other objective images it. With mirrored cover slips, however, the transmitted light (as well as the fluorescence it produces in the sample) is reflected off the mirror, so the two objectives can simultaneously collect four complementary views of the sample.

This doubles the speed of the microscope and markedly improves its efficiency at collecting light, which is useful for imaging fast-moving biological processes and samples with low light.

But collecting more information faster is only half the battle: It then needs to be computationally resolved to produce a image. Patrick La Rivière of the University of Chicago led the team in developing an algorithm to fuse the views and optimize spatial resolution in all three dimensions (x, y, and z).

"The computation is really enabling for this technique," La Rivière says. "While the mirror multiplies the information captured by the cameras, it also introduces some contamination that would not normally be there. What we were able to show is by properly modeling the process - basically, by converting the microscope into mathematics - we could effectively remove that contamination and recover all the information (imaged by the cameras)."

The team demonstrated the technique's applicability by imaging a variety of live samples, including microtubule, mitochondrial, membrane, and Golgi dynamics in cells and calcium activity in nematode embryos.

"The ongoing collaboration between Hari Shroff and Patrick La Rivière to innovate at the cutting edge of light microscopy continues a long tradition at the MBL of developing new and exciting ways to examine the fundamental processes of cellular life," says David Mark Welch, MBL Director of Research.

Over the past year, scientists at the MBL have been using a diSPIM system generously on loan from Applied Scientific Instrumentation, Inc. As part of the MBL's strategic initiative to advance innovation in biological imaging and image analysis, the MBL will purchase a diSPIM system by 2018 that will be available for use by all resident and visiting scientists and students.

More about National Institutes of Health