Supercritical fluids as a (literal) solution for formulation platforms

As a general rule, the pharmaceuticals industry develops new drugs by applying a complex procedure of formulation utilising excipients suitable for the final drug dosage form. Such development processes are carried out by the companies’ technical departments and in many cases result in solutions tailored to the individual active ingredient.

If the prognosis looks good for a blockbuster, this is certainly a sound method. If we consider smaller batch sizes or even (theoretical) custom production work, however, this method is then disqualified on account of its associated effort.

One possible alternative is the use of formulation platforms where the drug’s desired technical properties (such as rapid release, retardation) are predetermined by the platform itself and an API is then introduced into the carrier medium (e.g. tablets) only subsequently. This requires the API to penetrate the medium as a solution, however, where it can then precipitate out. The use of organic solvents cannot be entertained, on account of the potential toxicity of even the smallest quantities of identifiable residues. An ideal solvent would therefore be a material that is completely volatile and which also occurs naturally in the tablet. This solvent exists: it is referred to as supercritical carbon dioxide (scCO2) and disperses fully out of the manufacturing process once complete as gaseous CO2. 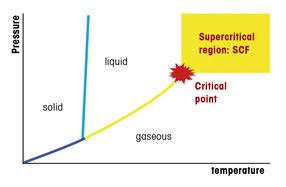 If we consider the phase diagram (fig. 1) for a material that is a liquid or gas at room temperature for higher temperatures and greater pressures, then we discover a point along the boiling point curve that is termed the “critical point”. At temperatures and pressures above this critical point, a material’s liquid and gas phases lose their identity: a state is achieved with a heterogeneous mixture of properties and the phase boundary (boiling point curve) disappears. A substance in this state is termed a supercritical fluid (SCF).

The supercritical fluid possesses a density and dielectric constant that approximates that of liquids, while its viscosity is that of a gas. These properties enable it to penetrate pores easily and dissolve a wide variety of substances. An SCF is therefore ideally suited for use as a solvent. Once dissolution or extraction is complete, the SCF is then released. With appropriate process design, a direct transition from the supercritical to gaseous state can be achieved, thus achieving the instant dispersal of the solvent. Simultaneously, the solubility of the dissolved substances also drops instantly. If a nozzle is used for the expansion process (“Rapid Expansion of Supercritical Solutions”, RESS), for example, then minute particles at the submicron or nano level are generated, since the huge expansion velocity leaves no time for crystallisation into larger particles [1]. 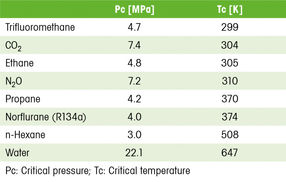 Tab. 1 Gases and liquids suitable for use as supercritical fluids

Suitable fluids include substances whose critical point indicates adverse effects on the properties of the substances to be dissolved are unlikely. Accordingly, the critical temperature in particular should not be too high (tab. 1). Useful examples include CO2, nitrous oxide or fluorinated hydrocarbons. The use of water at supercritical conditions (scH2O) for preparatory or production purposes is impossible since one would expect destruction of the API at temperatures above the critical point. Accordingly, scH2O is therefore used in the treatment of particularly problematic waste products [2].

For handling supercritical fluids, commercial plant is available from service providers for pilot production work, while large-scale facilities are generally offered only by specialist firms. 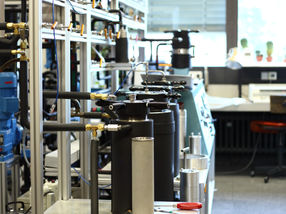 Pilot facility (manufacturer: SITEC-Sieber-Engineering AG, Maur, Zürich, Switzerland) for developing extraction, saturation and spray procedures with supercritical fluids at pressures of up to 50 MPa. The RESS spray canister (with filter) can be seen in the foreground, in front of two extraction tanks with capacities of 5 l and 1.5 l respectively. Controls and instrumentation are located in the blue box in the background.

SCF deployment techniques in the pharmaceutical and food industries

The basic precondition for using a SCF is the solubility of the process substance in the fluid in question. In this context, the solubility profile of scCO2 is comparable to that of hexane. Hydrophilic properties can be further increased by adding “entrainers” (co-solvents such as ethanol, added dynamically to the SCF in-process).

The standard SCF application scenario is supercritical fluid extraction (fig. 2). Thanks to the optimum solvent properties of supercritical fluids, they can be used to decaffeinate coffee beans without damaging the product, for example [3]. In this process, the beans are placed in high-pressure containers several cubic metres in capacity and then soaked in the SCF (usually scCO2). The caffeine removed by the process can be separated out using filters and then re-used. Depending on the soak time, the beans left in the containers are either low-caffeine or caffeine-free. Other extraction processes commonly encountered include hop extraction in beer production or the manufacture of spices and flavourings for the food, confectionery and cosmetics industries. Flavourings used in chocolate, for example, are made in the scCO2 extraction facilities of a south German flavourings maker [4]. Use of these flavours, whose taste is precisely monitored, also has the benefit of ensuring a product batch consistency far superior to that found when using untreated natural products.

SCFs can also be deployed in analytics. On account of its low viscosity, scCO2 can be used to produce separation column systems that would be impossible if normal solvents were to be used.

In modern pharmaceutical manufacturing, SCFs are primarily used in extraction processes (fig. 2). This enables plant extracts to be obtained undamaged, with good product yield and entirely free of solvent residues. Indeed, this procedure could actually enjoy much wider application if well-established (i.e. approved) extracts currently obtained with organic solvents were to be migrated across to the scCO2 procedure. In this context, regulatory agencies often present an impassable barrier, however, since they often argue that insufficient data is available concerning the influence of the SCF on the plant material: accordingly, the occurrence of (unknown) toxic by-products cannot be entirely excluded. To date, however, there have been no indications that such undesirable by-products do in fact occur.

Another possible application scenario for pharmaceutical production is the manufacture of submicroscopic and nanoscale particles. Particularly for APIs with low solubility in aqueous media (stomach/intestinal juices), the use of particles of the smallest possible size in the dosage form is a sound method for achieving adequate dissolution and hence bioavailability. The RESS process mentioned above is frequently deployed (fig. 2) in this context.  One problem this method presents, however, is the acquisition and processing of sufficient quantities of these minute particles. Agglomeration and electrostatic charges make handling especially difficult. 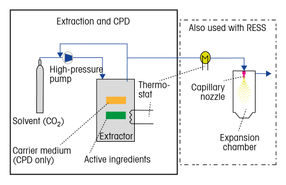 Fig. 2 Schematic diagram of an extraction and RESS facility for working with supercritical CO2.

One alternative to the manufacture and processing of such particles is the development of a formulation platform and the subsequent introduction of APIs into these delivery systems. In the process, porous carrier media are manufactured that permit monitoring of API release. The author’s research group has developed this kind of delivery system on the basis of both powders [6] and granulates [7], as well as using more complex media such as tablets [8]. Following manufacture, these systems are then saturated with the APIs. To do so, the carrier medium and active ingredient – the latter located in a separate 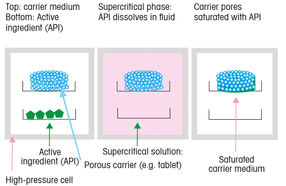 compartment – are both placed into an incubator. When scCO2 is applied, the API dissolves in the SCF and penetrates into the carrier medium. Once the pressure is removed, the API precipitates out onto both the outer and inner surface of the carrier medium (fig. 3). Here, the total saturation achievable depends on the API’s concentration in the supercritical fluid and the carrier medium’s available surface area. The latter consist of the carrier’s external surface plus the inner surface of its porous structure. Once saturated, the carrier media now display an active ingredient dissolution profile that correlates well with the dissolution velocity of the microparticles gained via the RESS procedure and which can be controlled via the carrier’s properties. Accordingly, both rapid-release and time-delayed drug delivery systems are possible.

This technique could also apply functional additives to foodstuffs such as bakery products. The lot sizes in the pilot facility used by the author (at a Swiss manufacturer’s) start in principle at a single tablet and could be augmented via the use of large incubators – as familiar from decaffeination plant – to a system of almost unlimited size.

See how easy it is to measure the moisture content of pharmaceuticals in the lab or directly on the production floor. (…)