Computer-Aided Drug design (CADD) is not new. The Journal of Computer-Aided Molecular Design (Springer) was founded in 1987, when computers in the worldwide top 500 were slower than today’s smart phones. This makes the field a quarter of a century old. Generally, scientific disciplines of this age have become mature, the major developments have been made and procedures have become routine. Superficially, this is also the case for CADD. However, the environment for all computer-based scientific disciplines has changed rapidly and continuously in the past quarter century. Our phones and automobiles have more CPU power that supercomputers 25 years ago and importantly, can also speak to each other more easily. This situation is exciting. We can do things that we couldn’t dream of in 1987. This should mean that CADD is also a rapidly expanding field in which new compute-intensive techniques are being introduced continuously to improve performance and applicability. Sadly, this is not the case. CADD has not used the possibilities open to it. However, there are signs that things are beginning to change.

In the traditional CADD scenario the number crunching was decoupled from the interactive data processing and knowledge generation process. Visualization was the domain of specialized graphics computers that were able to handle the extreme demands of visualizing proteins and their properties. That was before the games industry. Top quality molecular graphics are now at the bottom end of the demands placed on graphics hardware. At the risk of being boring, even smart phones can produce interactive 3D-molecular graphics that would have been beyond the first generation of raster-graphics machines. New web-based technology, such as Molcad’s web3d molecule visualizer can make high-quality interactive 3D molecular graphics available anywhere at any time. This is only the beginning; interactive 3D graphics that can be manipulated in real time can be shared by anyone with­ a suitable web browser. Moreover, the new Web based technologies open completely new direction in the simulation scenario: Number crunching can be directly integrated in the real time treatment of CADD-activities, even when these processes are performed at locations thousands of miles apart.

The in many ways unimaginable increase in the speed of computations opens possibilities of using theoretical techniques that were unthinkable in the early days of CADD. Sadly, very little use has been made of these possibilities. The vast majority of CADD-techniques today rely on atomistic classical mechanical models that were designed in the 1970’s for the hard- and software of the time. One of the most important interactions between molecules (electrostatics) is treated in this model by assigning a single charge at the center of each atom. This model is completely unsuitable for elements like chlorine, bromine and iodine, which appear negative from some directions and positive from others. These elements are generally assigned a negative charge, meaning that they repel other negative atoms such as the oxygens in the backbone chains of proteins in the model. This is the reverse of the true situation. In the correct orientation, backbone oxygen atoms attract atoms such as chlorine, bromine and iodin.

We are thus confronted with the situation that the models that we have used for CADD for a quarter century give ­the wrong sign for an important interaction (very many current drugs contain chlorine). How can this happen? The answer is probably that we have confused our models with reality. “Everybody knows” that chlorines in drug molecules “are negative”. That is true if you approach them perpendicular to the carbon-chlorine bond, but chlorine atoms “are positive” if you approach them from opposite the carbon to which they are bound. Currently, many attempts are being published to correct this situation by adding an extra positive charge to chlorine in the model.

This will fix the problem – but what about the next one? One of Thomas Kuhn’s signs of a failing paradigm is that it needs increasing numbers of ad hoc fixes. So why stick to classical mechanical models? We have a variety of quantum mechanical methods that all reproduce the chlorine-oxygen interaction correctly. Why not use them? The answer, sadly, is that they used far too much computer time in the 1970’s and 1980’s. Today’s hard- and software are easily capable of using standard quantum mechanical calculations to treat pharmaceutical databases of hundreds of thousands of molecule or even to calculate an entire protein target. Our challenge is therefore to combine modern theoretical techniques from other branches of chemistry with high-performance hard- and software to improve the performance and reliability of CADD. 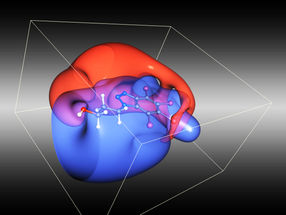 Why do we need to improve such a well established field? After all, CADD is used every day in dozens of pharmaceutical companies, apparently with good results. Well, another consequence of a paradigm at the end of its days is that it is defended strongly in the face of hard evidence that it does not work. A published test of docking and scoring algorithms used to estimate the binding affinity­ of drugs to their protein targets concluded with a table in which ten different docking-and-scoring techniques were used on datasets for ten different targets. The table reported the correlation coefficients between the experimental and calculated binding affinities. Of one hundred entries in the table, 64 were negative (i.e. they predicted the reverse trend to that found experimentally). Of the remaining 36, the highest was approximately 0.2. This is hardly acceptable performance but nonetheless, pharmaceutical companies rely on docking and scoring and dozens of papers using the technique without experimental confirmation are published every day. The whole situation is reminiscent of “the emperor’s new clothes”.

So what needs to be done? We need to rethink the way that we do CADD. Over the last decade, the emphasis has been placed on using existing techniques for increasing numbers of compounds. Given the results discussed above, this amounts to collecting even larger numbers of wrong predictions. Of course, the likelihood of a few predictions being correct increases with the number of predictions made. What we have been doing is buying more and more lottery tickets.

Is there a “system” that allows CADD to “win” and become predictive? We don’t know. What we do know is that there are theories of intermolecular interactions (which are what really interest us) that are far more accurate and above all general than the ones we currently use in CADD. A variety of quantum mechanical methods range from semiempirical MO-theory (which can calculate hundreds of thousands of molecules or complete proteins) to high-level ab initio theory (which for small molecules is usually more accurate than experiment). Density-functional theory (DFT) has become the workhorse of computational quantum chemistry and can easily calculate drug-sized molecules within a few minutes on a modern multicore node. It has been parameterized extensively in the last decade so that the newest functionals are very accurate for everyday molecules like drugs.