Coupling biological molecules to surfaces, and using them in this form for measurement procedures, for analysis and in production processes, is a novel approach that is gaining increasing importance in industrial applications. Using established procedures, surfaces and biological molecules are produced separately from each other and are then recombined using complex technological procedures. A particularly clever solution, however, is to use cells for the production of bio-molecules, which, with the aid of natural processes, independently transport these molecules to their surface and anchor them there. Thus, these cell surfaces or the whole cells, depending on the application, can be used for measuring procedures or manufacturing processes. For this, the auto-display technology offers a procedure for the simple and effective display of proteins, e.g., biocatalysts (enzymes), antibodies or signal receptors on the cell surface of the commonly-used laboratory workhorse, Escherichia coli (E. coli).

The auto-display system is based on the natural secretion mechanism of the auto-transport proteins [1]. Here, if a passenger protein or peptide is incorporated in the correct way into a precursor molecule, it is transported to the cell surface of a gram-negative bacterium [2]. To do this, inserting the coding sequence for the passenger correctly into the gene of the precursor, using gene technical standard methods is sufficient to ensure the transport to the surface. On the surface, the molecule is anchored using a porin-like structure, which is required for the transport and is part of the precursor, and due to its structure is called β barrel (Fig. 1). The use of the E.coli autotransporter has been meanwhile proven with a number of sample proteins. A number of very different enzymes have been displayed on the surface of E.coli; among these are hydrolases, dehydrogenases, esterases and electron-transferring active proteins. However, it is also possible to demonstrate antibody fragments, in-­hibitors, receptors and peptide libraries functionally ­easily and efficiently in this way [3, 4]. 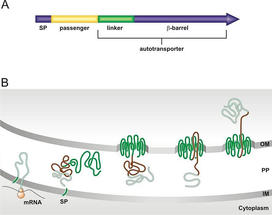 Fig. 1 Secretion mechanism of the autotransporter proteins (B) that are produced in the cytoplasm as precursors (A) and which are used in auto-display.

The advantage of functional surface expression

The expression of a protein or a peptide on the surface of a living cell, the so-called surface display, offers a number of advantages over the intracellular expression. The molecule on the cell surface is directly accessible for binding or activity studies. No membrane barrier has to ­be overcome and neither is it necessary to disrupt the cell. Furthermore, it has been demonstrated that immobilised proteins or peptides are much more stable in biotechnological applications than free cleaned molecules. In the case of the surface display by attachment to the cell membrane the molecule is present as if it was biologically immobilised. A third important advantage is seen when cells are used with surface-expressed proteins or peptides for the manufacture of molecular libraries. If a cell carrying the molecule with the desired property on its surface is separated out using a suitable selection procedure, the internal label for the surface expressed molecule, the encoding DNA sequence, is also separated out at the same time. In doing this, the primary structure of the surface-expressed molecule with the desired property is quickly and easily determined. In this case, it is sufficient to separate out a single cell using the surface-expressed molecule. This propagates itself independently to preparative amounts; all further steps result from this and are based on standard laboratory methods. This is also a decisive advantage of the surface display when compared to phage display used for similar applications.

Apart from easy handling, the auto-display system sets itself apart from all other surface display systems in three further points. Firstly, the number of the surface displayed molecules is in the order of 100,000 and greater. Despite this immense expression, there is no spontaneous cell lysis or loss of viability as is seen in other systems. ­The cells remain stable and survive total cell screening procedures, such as the Fluorescence Activated Cell Sorting (FACS) without problems. Selected single cells grow to clonal populations and can be used for analytical and preparative purposes. Secondly, two or more subunits expressed as monomers, if they have an affinity to each other, can aggregate spontaneously to form functional dimers or multimers on the cell surface. This passenger driven oligo or multimerisation has not been described for any other system, and is associated with the free movement of the β barrel structure used as an anchor in the outer membrane of E. coli. This offers the opportunity of making important eukaryotic proteins formed of various subunits, such as antibodies or receptors, available for the functional surface expression of E.coli. Additionally, you can perform combinatorics on the cell surface of E.coli, for instance when using the auto-display system in directed evolution. Finally, inorganic prosthetic groups can be integrated retrospectively into apoproteins, expressed on the cell surface, without damaging the cells.

Auto-display as a screening tool

Using auto-display, peptide active ingredient libraries can be expressed on the surface of E.coli, and then, due to direct accessibility, these can be searched for “hits” using simple methods. This follows the principle that peptides or proteins are displayed on the surface of the E.coli cells and that every E.coli cell carries a different peptide or protein version on the surface. Using the Fluorescence Activated Cell Sorting (FACS), these libraries can be searched quickly and “hits” can be easily extracted. 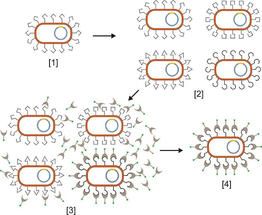 Fig. 2 Evolutionary development of active ingredients using auto-display. [1] Functional surface expression of a “biological“ or of “small protein drugs“. [2] Random variation and creation of a library of E. coli cells all carrying a different variant. [3] Screening using binding of the marked target. [4] Identification of the structure via co-selected associated DNA.

Using this technique, surface-expressed peptide libraries can, for instance, be screened for the specific interactions between inhibitor and target enzyme. Here, the affinity of a potential inhibitor to its target was used for selection. To do this, the target molecule was coupled to a fluorescent dye. Cells that displayed peptides on their surface with an affinity to the marked target could then be sorted out with FACS using the emitted fluorescence (Fig. 2). This strategy made possible the development of new biocatalysts and new active ingredients for use against chronic inflammatory diseases. A similar strategy was successfully used for the evolutionary development of antibody fragments. Through this, combinative libraries could be developed and screened. In principle, therefore, technology is available for systematic development of biologicals or small protein drugs. These can be receptor agonists or receptor antagonists, antibody-derived binding proteins or structurally completely independent binding proteins.

On the other hand, the auto-display technology can also be used for the surface expression of a pharmaceutically relevant target protein, which then can be used for scanning a library of small molecules or natural materials [6].