From potentiometry to the nanoscale

The pH electrode is now ubiquitous for the monitoring of chemical processes. Progress in materials chemistry and fundamental methodology opens the door to new exciting approaches.

The direct detection of ionic species in real time is extremely important for process and environmental monitoring as well as clinical diagnostics. The techno­logical nucleus of this approach has been the ubiquitous pH electrode, which today comes in many flavors and shapes to satisfy each user’s need. Beyond pH, clinical analysis has very much relied on the application of ion-selective electrodes (ISEs), which are potentiometric
sensors as well, but typically rely on different materials. Most scientific progress in recent decades has been with hydrophobic membranes containing lipophilic complexing agents (ionophores) for the detection of a wide ­
range of ionic species, including polyions [1].

Can we achieve calibration-free sensors?

Despite this materials success, potentiometry (see figure 1) is not really suited as a robust, calibration-free metho­dology. The potential at the reference electrode is prone to uncertainties and failure and the traditional liquid junction has been difficult to replace, although ionic liquids have recently emerged as a promising material principle to replace the aqueous bridge electrolytes [2].

Fig. 1 Schematic concentration profiles across an ion-selective membrane used in potentiometry (top) and thin layer coulometry (bottom) shown with the sensor responses on the right.

To improve the robustness of electrochemical ion sensors, new approaches have been explored that make use of otherwise the same materials principles as ionophore-based ion-selective electrodes. They rely on dynamic electrochemistry where an applied potential or current results in the transfer of ions from the sample to the membrane [3]. In the approach shown in Figure 1, the sample solution is brought into a thin layer format, which makes the transfer process exhaustive. This makes it possible to simply count, by integration of the current, the amount of ions in the sample, resulting in a technique that is potentially calibration-free and temperature independent. A side result of the dynamic nature of these techniques is that one changes the information on the sample. Instead of ion activities, one assesses the labile ion concentration of the sample. With hydrogen ion responsive systems, for example, this means that one can detect alkalinity or acidity instead of pH [4]. This opens the door to new direct detection techniques that historically needed aliquots and volumetric titrations.

On the other end of the spectrum, there is a growing interest in the miniaturization of ion-selective sensors
to the micrometer and even nanometer dimension. The most obvious driving force is the possibility to perform measurements in ultrasmall spaces, as the interior of cells, which is impossible to perform with bulk sensors. Micrometer sized optical sensors have been adapted for flow cytometry. Ion-selective microelectrodes and micro/nanosensors that behave on the basis of bulk optodes have been successfully applied in cells to monitor ion concentrations [5,6]. 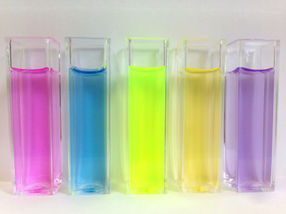 Our group has developed a simple and convenient methodology to produce self-assembled nanospheres for detecting metal ions [7]. The process requires dissolving all sensing components together with an amphiphilic copolymer in THF that is injected into aqueous solution. Nanospheres will form spontaneously owing to the hydrophobic nature of the sensing components, giving an average size of about 40 nm that, to the eye, appear just as a homogeneous solution (Fig. 2). However, these optical nanosensors still behave on the basis of ion exchange principles and maintain electroneutrality in their hydrophobic core.

Ion optodes have historically suffered from a pH cross response. Some fluorescent ion indicators also exhibit similar pH interference. To overcome this limit, we have recently proposed an exhaustive sensing mode where the analyte is consumed by the sensor and thereby allows for a pH independent response [8]. Suspensions of ultra-miniaturized optodes are very attractive in this respect since the sensor response is dramatically faster compared to traditional cast films. An exhaustive sensing mode is very useful when the experiment of interest can tolerate the analyte consumption.

In addition to this strategy, one may remove the lipophilic pH indicator dye to mimic the composition of ISEs at the nanoscale. We have recently been investigating voltage sensitive dyes to image the electromotive force of these ion selective nanospheres, converting the potentiometric response to fluorescence readout.

Moving to the future: Blurring the lines between solution chemistry and sensing

Ionophore based ion-exchange nanosensors may contribute to different interesting directions that blur the lines between solution chemistry and chemical sensing. We are investigating ionophore-based nanoprobes as novel complexometric titration reagents [9]. Water soluble organic chelators such as EDTA have been widely applied for chelometry but the selectivity and working pH range have not really evolved in the past 60 years. Ionophore based nanoparticle suspensions may overcome existing drawbacks and potentially replace these reagents. The complexation reaction is moved from the aqueous phase to the organic nanospheric phase where highly selective ion receptors are embedded. Figure 3 shows the comparison between Ca2+ titrations using EDTA and calcium-selective nanospheres containing ionophores. 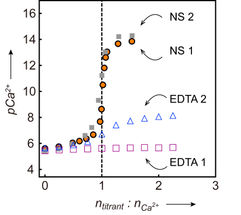 We have recently introduced the concept of photodynamic ion sensors in the form of polymeric films [10]. These sensors can be switched ON and OFF by illumination with light. Photoswitchable dyes such as spiropyrans are used as chromoionophore for this purpose. Under ultraviolet light irradiation, spiropyran will transform to photo­merocyanine which has a much higher affinity for protons. Illumination with visible light can convert the photomerocyanine back to the non-basic spiropyran. When a photodynamic ion sensor is miniaturized into the nanoscale, it not only functions as a light activated sensor but can also serve as a light responsive tool for ion concentration perturbations in the sample [11]. The light controlled release or uptake of ionic species can potentially form new platforms for uncaging reagents and delivery systems. While these are exciting prospects, one should not underestimate the expected complications associated with experiments in vivo and in other complex media.

The development of new approaches to detect ions by electrochemistry and the miniaturization of ion-selective optical sensors is quite exciting. But much remains unexplored, and future work needs to focus on the understanding of these new sensing tools and their application in demanding areas, followed by identifying the challenges, improving the materials toolbox and demonstrating key applications of analytical importance.