Diamond nanoparticles or nanodiamonds (NDs) behave several essential assets for biomedical applications: their very weak cytotoxicity and genotoxicity [1], their carbon-related surface chemistry for covalent functionalization of targeting or labeling moieties (oligonucleotides, proteins, fluorescent dyes, peptidic nucleic acids [2],…) and their tunable surface charge toward drug delivery [3]. In particular, detonation nanodiamonds synthetized by explosion [4] combine all this possibilities in a primary size of 5 nm, compatible with kidney filtration for an expected easier elimination. Nevertheless, these NDs are extremely sensitive to their surface state.

The Diamond Sensors Laboratory (CEA-LIST) has developed an expertise focused on controlled surface chemistry of NDs. Original treatments like plasma hydrogenation [5] or surface graphitization [6, 7]
were optimized to get a homogeneous surface chemistry leading to specific electronic surface properties or functionalization routes. Such NDs possess a tunable surface charge and a very high colloidal stability in biological media. 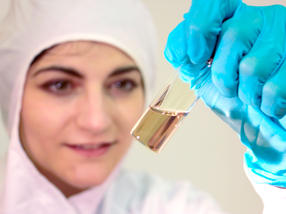 Hydrogenated nanodiamonds were exposed to a microwave chemical vapor deposition plasma of hydrogen. 80 mg of nanodiamonds, precisely weighted on Mettler-Toledo Quantos (QB5-L), are treated each time. Atomic hydrogen produced under microwave field leads to the etching of non-diamond carbon, the reduction of oxygen species and the formation of C sp3-H bonds. Kinetics of this hydrogenation technique were investigated by sequential surface analysis [8]. Using a home-made MPCVD reactor, optimal conditions were applied to produce large amounts of H-NDs (see fig. 1) [9]. Hydrogenated NDs (H-NDs) exhibit a diamond core surrounded by stable C-H1 terminations. A high affinity of H-NDs toward water molecules was demonstrated by adsorption isotherms (BET) with more hydrophilic sites compared to NDs-COOH [5]. As a consequence, stable H-NDs suspensions were obtained in water exhibiting a positive Zeta potential (ZP), + 45 mV at pH= 7.4 (see fig. 2). Its origin was related to a transfer doping occurring onto 5 nm diamond nanoparticles based on the diamond semi-conductive behavior.

The chemical reactivity of H-NDs was investigated via photochemical reaction with alkenes or diazonium chemistry. Their behaviour reveals similar to the one of hydrogenated diamond films [10]. 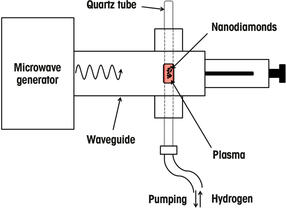 Hydrogen terminations can also confer new electronic properties to NDs, which can be promoted toward radiosensitization effect for cancer treatment. Indeed, an in vitro radiosensitisation effect for hydrogenated
5 nm NDs was demonstrated on radioresistant cell lines under gamma irradiation (collaboration Experimental Cancerology Laboratory; CEA iRCM) [11]. Under X-rays irradiation, H-NDs are able to generate a high concen­tration of reactive oxygen species (ROS) which could be efficiently used against tumoral cells. The ROS production might be in relation with the specific electronic properties of hydrogenated surface i.e. its negative electron affinity and strong reactivity toward water molecules [5]. Biological effects are under investigations [12].

Nanoparticle radiotracers are currently widely used to assess quantitatively the health hazard related to nanotechnologies or as theranostic agents [13]. Replacing the hydrogen gas by tritium during the plasma, this surface chemistry can be easily turned to C-H3 thus providing intrinsic radiotracing properties to the particles, essential prerequisite to a biodistribution study. A radioactive labeling of the diamond core itself appears as a promising approach that ensures the tracing of NDs. Such a direct radioactive labeling using plasma treatment has been recently achieved [14]. The total radioactivity measured by liquid scintillation includes 93 % of H3 atoms tightly bonded to the NDs surface and 7 % embedded into the diamond core. Such H3 doping ensure highly stable radiolabeled nanodiamonds on which surface functio­nalization is still allowed.

Carrying a positive zeta potential desirable for delivery and offering a diamond core with therapeutic potentialities, H-NDs have now reached a maturity for nanomedicine. Nanodiamonds were previously considered as an efficient but inert platform. We demonstrated that NDs and more specifically H-NDs should now be considered
as an active nanomaterial.