Effect pigments – A successful interplay of chemistry and physics

Pigments have been used by people as colouring substances for centuries. Although naturally occurring compounds and elements were originally used for making pigments, e.g. iron oxide, manganese oxide, ultramarine and carbon black (soot), with the development of industrial chemistry from the 18th century onwards, there was an ever-increasing range of synthetic pigments available. These are subdivided into organic and inorganic pigments. Nowadays the vast majority of the pigments used have been synthesised. They are formed from particles which are insoluble in the application medium (varnishes, synthetic materials, printing inks, cosmetic formulations and construction materials, etc.). These are therefore to be distinguished from similar dyes which are soluble in the application system.

Strictly speaking there are several categories of pigments: white pigments, coloured pigments, black pigments and special pigments. The last-named category also includes transparent and functional pigments (magnetic, anti-corrosion and luminescent pigments) as well as the effect pigments which can be subdivided into  metal effect pigments (the most important of which are aluminium and copper-zinc alloys) and special effect pigments (the most important of which are pearlescent and interference pigments). Although almost all pigments are more or less irregularly formed and ideally have a particle diameter of between 0.1 and 2 µm, effect pigments consist of relatively large, transparent, semi-transparent or light impermeable platelet-shaped particles whose diameter is predominantly in the range of  5 to 100 µm. 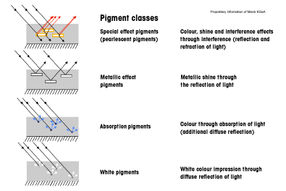 Fig. 1 Optical principles in the interaction of visible light with particles of various pigment classes.

What makes effect pigments so unique?

Both metal effect pigments and special effect pigments produce lustrous effects in the pigmented surfaces,
e.g. in varnishes and paints, which derive from the targeted reflection of light on to the flat formed pigment particles which are aligned in parallel in the application medium. In the special effect pigments pearlescence and interference are created by the division of the light from the light rays falling on the pigment surface because only a portion of the light is reflected while another part of the light penetrates into the transparent or semi-transparent particles and onto the deeper lying boundary layers from where it is reflected back. This results in the overlaying of light waves which, depending on their wavelength, are either intensified or diminished (interference).

With the careful selection of the required refractivity and coating thickness of the pigment particles, bright interference colours can be produced (interference pigments) [1 – 4]. A metallic sheen is, by contrast, produced by the simple reflection of light from metal platelets. The interactions using visible light that are fundamental to special effect pigments and metallic effect pigments are shown in Figure 1 in a comparison with absorption and white pigments.

The special effect pigments, described in more detail below, are used to achieve visual effects such as those which we find in natural or artificial pearls, fish scales, bird’s plumage, beetles or soap bubbles. The critical factor in all of these is that the light is reflected not just from the uppermost boundary surface but also from internal boundary surfaces as well as from the lower boundary surface of the pigment particles. The most important base material for pearlescent and interference pigments is the natural mineral mica. Transparent to semi-transparent effect pigments based on mica platelets are coated with a micromillimetre-thick layer of highly refractive metal oxide (e.g. titanium dioxide, ferrous oxide or iron titanate) and are formed using the thin layer-substrate principle. In the application medium they may have a pearlescent iridescent lustre. By selecting the right metal oxide and therefore the right refractive index for the visually highly refractive coat – as well as the thickness of the coat (coats are normally from 50 to 500 nm thick) – various types of coloured interference phenomena combined with gloss effects can be created. Because of variations in the sizes of the pigment particles varying effects from silk-matt to a very glossy transparent to a more opaque finish can be created.

With many of the special effect pigments built up in this way the observer can watch the colours changing as the object moves. Many more different, unusual and attractive iridescent effects with changing colours can be achieved by the interplay of interference pigments with white, coloured and black pigments.

In addition to mica pigments (synthetically produced mica pigments are now used as well as the natural mica for these purposes), effect pigments made from silicon dioxide, aluminium oxide and borosilicate platelets have been available for several years now. These are also enclosed in a highly refractive metal oxide [5,6]. According to their precise composition they produce an intense change in colour dependent on the angle of view of the observer (colour flop), which is achieved either by a pronounced crystal effect or through particularly pure interference colours.

The range of uses for these pigments manufactured under strict environmental standards ranges from car paints through industrial varnishes, beauty and skin care cosmetics, all types of packaging, carpets, ceramics and jewellery right up to foodstuffs (Fig. 2). Special weather resistant (WR) pigments have been developed for use on surfaces which are used outdoors (e.g. car paints). These provide extra stability and are optimally adapted to the various paint systems in which they are used.

Use of various synthesis methods for special effect pigments

Metal oxide - Micaceous iron oxide pigments are ideally manufactured using Muscovite mica as the starting material. The mica, a sheet aluminosilicate, is mechanically split into thin platelets. The mica platelets are then graded in order to achieve a particular particle size distribution which is the found in almost exactly the same way in the mica pigments at the end of the process. Typical mica fractions have particles sizes of 5 – 25, 10 – 50 or 30 – 110 µm. The ratio of the platelets’ diameter to thickness (the aspect ratio) can be used to specifically regulate the two most important characteristics of the resulting effect pigment – the brightness and the coverage [1 – 4]. The graded mica platelets are transferred into an aqueous suspension for the manufacture of the pigments. The application of highly refractive metal oxide layers – in some cases these are made of alternating highly refractive and low refractive layers (multi-layer pigments) – is achieved by a strictly controlled precipitation reaction, which begins with metal salts (e.g.  TiOCl2, TiOSO4, FeCl3, FeSO4). The important thing here is that  the metal oxyhydrates which are initially formed (e.g. titanium dioxide hydrate, ferrous oxyhydrate) are deposited as fully as possible on the surface of the mica particles. The precipitation procedure is continued until the required layer thickness is deposited. The products obtained are washed, filtered and annealed at temperatures of between 700 and 900°C. Pure titanium oxide is produced on the mica platelets by using a titanium salt in the anatase modification or ferrous oxide can be produced using a ferrous salt. To deposit the rutile coats on the mica, a thin tin dioxide layer is first applied before the precipitation of the titanium dioxide begins. Following the annealing the TiO2 is present in the rutile modification.

Synthetic substrates, such as SiO2, Al2O3 or borosilicate platelets, are produced using special processes [5, 6]. In this way silica flakes are produced using a coil coating process in which a starting solution containing silicon is applied to a rotating band. It is then dried and the flakes with a very fine layer thickness are released from the band. The silica flakes accessed in this way show similar particle size distributions to those of the mica fractions. They are, however, characterised by the fact that all the silica substrate particles used for a particular pigment have the same layer thickness. The normal thicknesses of these platelets are in the range between 250 and 600 nm. Effect pigments which are manufactured with such precision in regard to substrate thickness are distinguished by their colourful effects which are strongly dependent on the angle of view of the application systems (colour flop).

Al2O3flakes (alumina flakes) are obtained by a process of growing crystals which starts with precipitated aluminium hydroxide which has been treated in a salt melt at temperatures of 900 to 1,400 °C. They are thin,
hexagonal flakes which ideally have a smooth surface. Alumina flakes are monocrystalline and are crystallised
in the corundum structure. Pigments manufactured using alumina flakes are used for applications in which the colours are required to sparkle.

Fig. 3 Scanning electron microscopic images of an effect pigment, consisting of aluminium oxide platelets which are coated with titanium dioxide: a) Overview image, b) Cross-section through an individual pigment particle.

Silica flakes, alumina flakes and the borosilicate platelets produced in a salt melt are used for pigment synthesis and. like the mica pigments are encased in thin, highly refractive metal oxide layers. The desired interference colour of the pigments is determined by the thickness of the metal oxide layer. In the case of TiO2 layer thicknesses of about 50 nm, these produce silver-white glossy pigment (anatase or rutile processes). For making coloured interference pigments TiO2 layer thicknesses of around 80 nm are required for yellow (golden) types. For blue interference pigments by contrast, layer thicknesses of around 120 nm are necessary. In this way the required layer thicknesses can be precisely regulated during the precipitation and annealing processes. The interference colour sequence obtained with an increasing TiO2 layer thickness is very exactly correlated with the results of the relevant optical calculations. Fig. 3 shows scanning electron microscopic images of an effect pigment composed of aluminium oxide platelets and coated with titanium dioxide (overview, surface and cross section of a pigment particle).

That developments in effect pigments are as yet far from complete is shown by the recent introduction onto the market of new types of pigment based on aluminium platelets. In these first a stabilising passive layer and
then a colouring ferrous oxide layer are deposited onto thin aluminium platelets. The golden, orange and red pigments obtained in this way combine the advantages of metal effect and interference pigments.